A Viatores Christi volunteer from Westport, Gena Heraty, will receive the Oireachtas Human Dignity Award this week for her work in Haiti. 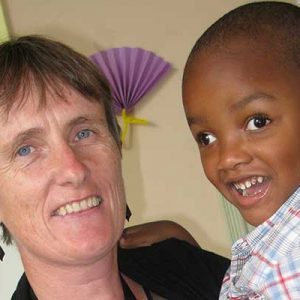 Gena joined Viatores Christi in the early 1990s. After training in overseas development, she travelled to Haiti in 1993 to work as a volunteer at an orphanage run by NPH. This is a charity known in English as ‘Our Little Brothers and Sisters’, from the Spanish ‘Nuestros Pequeños Hermanos’.

Gena began working in the special needs unit of the orphanage, which is in Kenscoff, 10 km from Port-au-Prince. She is now director of the charity’s special needs programme in that part of Haiti.

Part of her work involves an outreach service in the outlying community, providing life-changing medical, rehabilitation and educational support for around 100 families whose children have severe physical or intellectual disabilities. The project is supported by Irish Aid funding from Misean Cara.

The Mayo woman will be presented with her award at Leinster House by An Ceann Comhairle, Seán Ó Fearghaíl TD, on Thursday 8 December. Each year the award is made to one person who has shown huge commitment to the promotion of human dignity.

Haiti is one of the poorest countries in the world, with a per capita GDP of US$846 in 2014 – equivalent to US$2.31 per person per day. As a result, there are very few services available for those with a disability or poor health.

Since the lay missionary organisation Viatores Christi was founded in Dublin in 1960, it has placed more than 2,000 volunteers on assignment overseas. Currently, the organisation has 27 volunteers serving in Africa, Southeast Asia, Latin America and the Caribbean.

Over the last 20 years, Viatores Christi has placed many volunteers with specialist skills to work alongside Gena in the orphanage at Kenscoff. At present, the missionary organisation has a specialist physiotherapist and programme co-ordinator in Haiti, with another physiotherapist working at a different NPH site.