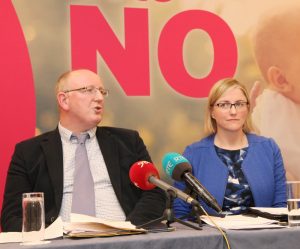 An Irish consultant obstetrician told a press gathering on Wednesday that he had never been prevented by the Eighth Amendment from doing everything necessary to fully care for women and to fully protect them in his practice.

“Any suggestion that Irish doctors cannot intervene to protect women is deliberately misinforming the Irish public and creating unnecessary fears. I’ve never gambled with the lives of my patients. I’ve never lost a mother,” said consultant obstetrician Dr Trevor Hayes. “The Eighth Amendment has never prevented me from doing my job to the best of my ability.”

Dr Hayes, a consultant in obstetrics and gynaecology at St Luke’s Hospital, Kilkenny, who has almost 20 years’ experience in medicine, referred to the Medical Council of Ireland’s Guide to Professional Conduct and Ethics 2016, which allows “therapeutic intervention” when rare complications arise in pregnancy “which may result in there being little or no hope of the baby surviving. In these exceptional circumstances, it may be necessary to terminate the pregnancy to protect the life of the mother while making every effort to preserve the life of the baby” (48.2).

The following clause 48.3 continues: “Abortion is legally permissible where there is a real and substantial risk to the life of the woman which cannot be prevented by other means. This risk, while substantial, may not be immediate or inevitable in all cases. This risk should be assessed in light of current evidence-based best practice.”

Commenting on these guidelines, Dr Hayes said they were “very clear” and that there “is no doubt whatsoever nor should there be any doubt that we can intervene to protect the life of women. Doctors do not have to wait until the threat to life has become imminent.”

Dr Hayes said he was concerned about the “significant and untrue public statements about the practice of maternal healthcare in this country” that had circulated in recent weeks. “No doctor doing their job properly would wait until there is an immediate and critical threat to a pregnant woman’s life before acting to protect the woman. The Eighth Amendment does not stop me from doing my job.”

He added that if repeal were to happen, “99 per cent of abortions would take place for any reason at all or on supposed mental health grounds. That’s the reality based on what has happened in other countries but you wouldn’t think it based on how the present debate is being conducted.”

At the Iona Institute press briefing on Wednesday, lawyer Maria Steen told journalists that British law did not allow for abortion on request. “At no point in its law does Britain permit on request, or at least not in theory. At every point two doctors must first approve the abortion. But as we know, in practice, the British regime is one of abortion on demand. Everyone knows the two-doctor rule is a fig leaf. But on paper, the British law is more restrictive than that of other European countries,” she told journalists.

In the UK (where between England, Scotland and Wales around 200,000 abortions occur each year), 90 per cent of terminations occur in the first trimester, as evidenced in the Abortion Statistics, England and Wales: 2016.

“So we can see that even if the government was planning the 12-week rule only, that alone would be tantamount to abortion on demand because almost every abortion has happened by this point. It is therefore deeply dishonest of both the government and the Repeal campaign to pretend the proposed law is restrictive,” she added.