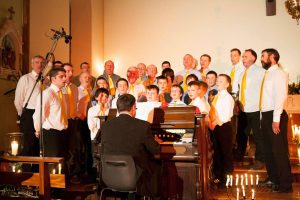 God can work through music to touch the soul, Archbishop Eamon Martin stated as he launched The Masses of Seán and Peadar Ó Riada: Explanations in Vernacular Chant, a book and CD by Dr John O’Keeffe.

Pope Emeritus Benedict XVI spoke to church musicians five years ago and reflected in particular on the relationship between sacred song and the new evangelisation, the Archbishop said. He quoted the Pope Emeritus who said we must “show how the Church may be the place where beauty feels at home”.

Archbishop Eamon Martin said: “Our role as music ministers, as music missionaries, is simply to bring the very best of our gifts, as Seán and Peadar have done, to the task of praising God, and then to leave the rest to God and the power of the Spirit to move others and build up their faith.”

Father Mullaney, President of Saint Patrick’s College Maynooth, welcomed everyone. The Archbishop told those present that in his first year at Saint Columb’s College in Derry he was introduced to Gregorian Chant and Ó Riada’s sacred music.

“Thanks to Seán Ó Riada we could now praise God in our mother tongue, as the Second Vatican Council had encouraged all God’s people to do,” he said.

Ó Riada’s Mass setting was a favourite during his seminary days, and he recalled Cardinal Tomás Ó Fiaich’s “gravelly intoning of the Ár nAthair”. 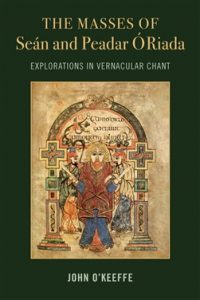 Dr John O’Keeffe, the author of the Ó Riada book, has spent a quarter of a century working in Maynooth, which has strong links with Ó Riada and Cór Chúil Aodha. There is a history of sacred music, and chant and other forms of liturgical music at both Saint Patrick’s College and Maynooth University.

The book is published by Cork University Press, which stated that: “Sean Ó Riada’s Mass, Ceol an Aifrinn, containing such iconic settings as Ár nAthair, Is Naofa and Ag Críost an Síol, emerged at a crucial historical juncture when Irish people were, under Ó Riada’s own considerable influence, beginning to rediscover the dignity of their native musical tradition.”

At that time the Catholic Church, following the Second Vatican Council, was beginning to explore the liturgical potential of vernacular languages and cultures. Written for the Gaeltacht community of Cúl Aodha, it was to be the first of three Ó Riada masses which drew on a rich oral song tradition.

The music is presented in musical score and in audio file on an accompanying CD, and according to the publisher the publication has cultural and liturgical integrity. It advances a “fresh and potentially liberating” definition of chant (sung prose) and redeems the concept of vernacular chant from existing limited understandings.

This study, published on the 50th anniversary of the Vatican II instruction Musicam Sacram, examines in detail the contents of Ceol an Aifrinn, together with those of the composer’s Aifreann 2 (written for the Benedictines at Glenstal Abbey) and Aifreann Eoin na Croise, written by his son, Peadar Ó Riada.

It highlights the significance of the achievements of both composers, and validates their work against the heritage, discipline and compositional principles of western plainchant. It shows their work as a model for  “contemporary vernacular liturgical music”, according to the publisher.