The O Antiphons of Advent

”The “O Antiphons” traditionally sung during the last week before Christmas (December 17-23), are more than a thousand years old. The traditional Advent hymn, “O Come, O Come, Emmanuel” Is probably the most popular and well known way of remembering some of those antiphons. They are called the “O Antiphons” simply because each begins with the word, “O” Originally used in monastic vespers during the last seven days before Christmas; gradually they came into use in the whole church. Today, at Evening Prayer (Vespers), the O Antiphons are used as the antiphons to introduce the Magnificat – Mary’s Hymn of Praise. The Gospel Acclamation at all Masses in these seven days uses the “O Antiphons” as well.

Each antiphon denotes an attribute of the coming Christ. In Latin, they are

If you take the first letter of each name of Christ, starting with last, “Emmanuel,” and go to the first, you have “ero cras,” a Latin phrase meaning, “I come tomorrow.” 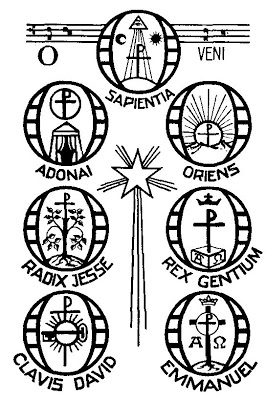