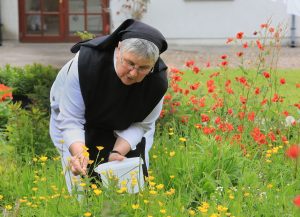 Nuns at St Mary’s Abbey have seven new cards after their open call to the public to create a Christmas card.

A modest number of designs had arrived just days before the deadline, but on the last day they flooded in.

“I received a flurry of designs, including six sent by a teacher from students in her fifth class in primary school,” Sr Eleanor told Catholicireland.net.

The selection of the design of one of those pupils, along with those of six other artists, was announced by the abbey card department on 9 August 2018. Other designers include college students, retirees and graphic artists. Oils, watercolours, acrylics, inks and collage were among the media they employed.

The initiative followed the death of Cistercian sister and designer Sr Paula Kiersey ocso, who was a well-known professional artist before she entered the community.

“She was an iconographer and she did all the designs [for our cards], and since she has gone to God we have been using various people. We just needed to freshen things up,” explained Sr Eleanor.

One of Sr Paula Kiersey’s classic designs will be included in this year’s selection, as will three designs by sisters of the community. Another card in the Christmas 2018 range will include a photo by Valerie O’Sullivan, whose photos were featured in the book A Year in the Life: Glencairn Abbey.

The new artists chosen (in alphabetical order, by surname) include:

– Gillian Brady, who is an architect based in Dublin, with a strong interest in contemporary art and design. She draws buildings for her job, but can be found making cards for friends and family. Collage and ink are favoured media.

– Ken Buggy, who lives close to Glencairn, and worked in the hotel and catering business until his retirement. He is very artistic and his Christmas card design is worked in oils.

– Margaret Byrne, who is a nurse in Cork University Hospital. To relax, she makes cards for family and friends.

– Alina Cojocaru, who is a pupil in Our Lady of Mercy Primary School, Cahir, Co. Tipperary. She was one of several pupils who created and submitted designs through their class teacher, Fidelma Nugent.

– Clodagh Creedon, who is a creative media student at Dundalk IT and hopes to get into graphic design. Her card was designed using watercolours and acrylics.

– Nodlaig Ryan Donegan, who lives in Newtownshandrum, Co. Cork, and manages a preschool; her love of children is reflected in her design. Her preferred medium is oils.

– Hélène Garetta, who is one of several overseas people who responded to the call for card designs. She is an artist living in France, and has visited Glencairn Abbey.

The sisters offered no payment, but will ensure that the chosen designers will be promoted through the printing of their names on the back of their cards and in the sales catalogue and webpage. They will also link St Mary’s Abbey website and social media to the designers’ and artists’ websites.

The Glencairn industry began in 1955 with the design and production of Christmas cards and other greeting cards by the late Sr Paula Kiersey who, after the changes in monastic life at Vatican II, returned to her art and specialised in writing icons, which are also featured in cards.

Glencairn Cards has evolved over the years and now includes cards for all occasions, in Irish and English, for Christmas, Easter and St Patrick’s Day as well as memorial and acknowledgement/thank you cards. The cards are designed and printed in the abbey print works.

Designs include printed reproduction flower cards as well as photo cards depicting scenes of nature around the abbey. The production of pressed flower cards, from flowers in the monastery garden, began in 1999 as a sister’s hobby and has since become one of the most popular range of cards. Personalised cards, bookmarks and prayer cards can be made to order for special occasions.