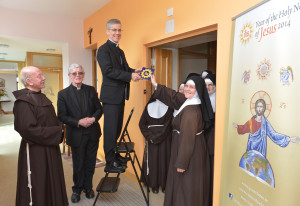 The Papal Nuncio launched a new range of devotional tiles in Galway on Tuesday as part of 2014’s year of special devotion to the Holy Name of Jesus.

Visiting the enclosed Poor Clare Sisters on Nun’s Island, Archbishop Charles Brown placed the first of the 2014 tiles into the wall of the nun’s enclosure, watched by Mother Abbess, Sr Colette and Fr Fearghus of the Franciscan community in Galway.

A wave of devotion to the Holy Name of Jesus sprang up in 1914 and many people identified their devotion by purchasing the distinctive blue tiles bearing the monogram IHS or YHS and placed it above the entrance door to their homes.

Examples of the devotional tiles have been found all over Galway, Limerick, Ennis, Cork and beyond.

“There’s always been a kind of mystique surrounding the blue tiles and also some peculiar theories as to what they meant,” according to Poor Clare Abbess, Sr Colette.

“This is a good chance to affirm that they do not indicate Garda stations!”

The custom of placing an IHS monogrammed tiled over the door of houses was popularised by St Bernardine of Siena in the 15th century. He introduced this custom as a means of encouraging people to practice Christian charity and to be peacemakers.

It was also a way of invoking God’s protection upon the house-dwellers.

The 2014 Year of the Holy Name of Jesus, to which Pope Francis has given his personal support, was initiated by the Irish Franciscans in conjunction with the Poor Clares.

“The Holy Name tiles are a subject of interest not only from a religious point of view, but also from the perspective of local heritage and social history, ” Franciscan Fr Francis Cotter, co-ordinator of the Centenary Year, explained.

The first batch of the new version of the ceramic tile has practically sold out.

Deirdre Morris of the interdenominational An Tobar Nua bookshop in Galway city, which stocks the tiles, said there were just five left out of the first batch.

She said they were now looking at ordering a further two batches of the hand-painted ceramic plaques from the Italian business which designs them.

“There has been a particular interest around Galway and Ennis”, she explained. There are two types of tiles, one of which retails for €60 and the other for €65.

According to Sr Colette, they hope to have one of the tiles presented to the Pontiff before the year is out.

The nuns also plan to introduce a fridge magnet bearing the mongram as an alternative to the tiles over the coming weeks.

Sr Faustina told CatholicIreland.net that IHS/YHS signifies the name of Jesus, “the shortest and most effective prayer in existence.”

According to Sr Faustina, the tiles are being promoted as a token of faith and hope.

“The name of Jesus means God saves. There is so much desperation out there, it is something for people, and particularly people with addictions, to cling on to.”

She said she was unsure whether the Nuncio, who was presented with one of the tiles on Tuesday in Galway, would hang it over the entrance to the nunciature in Dublin.

A website www.holyname.ie has been set up and contains information on the Holy Name plaques.

The new tiles are available from Bothar Emmaus Christian Bookshop, An Tobar Nua, 25-29 Lower Dominic Street, Galway. Contact Deirdre: 087 2145379/091 562175 and will soon be available through the www.holyname.ie website.