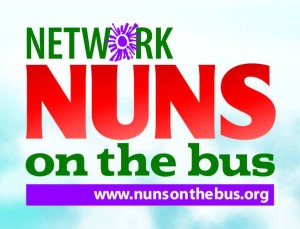 The nuns are back on the bus in the USA and on their way to Washington for Pope Francis’ visit which begins on 23 September.

Their bus will travel through dozens of towns and cities where the nuns will be involved in ‘town hall’ type meetings at which they will take video clips of the stories and needs of the people.

They hope to send those clips to the Pope in advance of his visit.

Sr Simone Campbell, one of the organisers, said she wants Pope Francis to be able to hear from “folks that he wouldn’t otherwise be able to see or hear from.”

The bus initiative has at its core a faith-based promotion of economic justice and political consensus for the common good.

“Pope Francis talks about an economy of inclusion,” said Sr Simone, who is also executive director of NETWORK, the Catholic social justice lobby that organised the first ‘Nuns on the Bus’ tour during the 2012 presidential campaign.

“What he says is that politics needs to control economics, economics should not control politics,” she said.

“In order to have an economy that works, we need to have a politics of inclusion, which can be achieved by prioritising the common good and listening to the needs of hardworking individuals, families and communities.”

They travel to cities and states which are dealing with some of the worst challenges and divisions facing the US.

“When we return to Washington, we will lobby congressional leaders to pass a faithful federal budget that restores economic opportunity, invests in America, and cares for vulnerable members of society,” she added.

The more than 2,000-mile bus trip will include 33 events such as meetings, visits to shelters, transitional housing facilities, schools, food pantries, parishes, congregations, and ministries working with returning citizens.

They will start in Missouri on 11 September and continue on through Kansas, Arkansas, Tennessee, Indiana, Ohio, and West Virginia.

NETWORK plans to listen, encounter, and walk with people across the US and wants to amplify their concerns to get Congress to do the same.

“We look forward to meeting and learning alongside people in these communities and returning to Washington to advocate for a faithful budget that responds to their needs,” said Sr Simone. 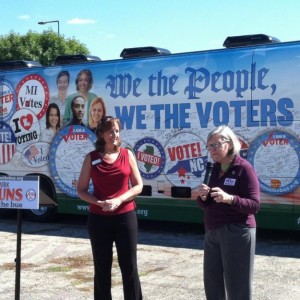 The bus will conclude its journey in Washington as the pontiff arrives for his six-day visit. This is his first trip to the U.S. as Pope.

On Wednesday 23 September he has a personal meeting with President Obama at the White House.

Also that day, Pope Francis is expected to have Midday Prayer with US bishops at St Matthew’s Cathedral in Washington DC, and preside at the Junipero Serra Canonisation Mass at the Basilica of the National Shrine of the Immaculate Conception.

On Thursday 24 September, Pope Francis will address a joint meeting of Congress — a first for a pope.

Sr Simone will also attend this address as Senator Barbara Boxer’s guest. Later, he will visit St Patrick’s Catholic Church in Washington DC with Catholic Charities of the Archdiocese of Washington.

The Pope will arrive in New York for Evening prayers at St Patrick’s Cathedral. The following morning Friday 25 September he will address the United Nations General Assembly, attend a multi-faith service at the 9/11 Memorial and Museum, World Trade Center.

Visits to East Harlem and Central Park and a Madison Square Garden Mass will conclude his visit in New York.

In Philadelphia on Saturday 26 – Sunday 27 September, the Pope will focus in particular on the World Meeting of Families, with a vigil and a Mass and meeting with organisers.

Visits to a school, centres for the homeless and prison will also be part of the Pope’s itinerary in the US.