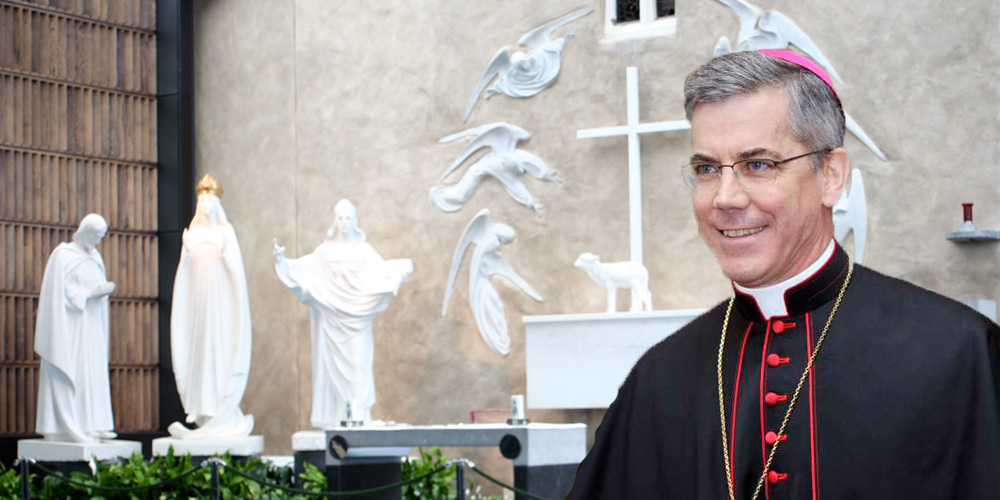 “If it is a joy for the Church to announce a new pope, it is an even greater joy to announce that two popes are saints,” the Papal Nuncio to Ireland told a packed basilica in Knock on Sunday afternoon.

In his homily for Divine Mercy Sunday, Archbishop Charles Brown told the thousands of pilgrims, “We can only imagine the joy that was present among the millions of people in and around St Peter’s Square this morning when Pope Francis canonised Pope John XXIII and Pope John Paul II, two popes who so powerfully shared the history of the church in the 20th century.”

Elsewhere in his homily, he asked, “What was it about Pope, now St John XXIII, which inspired him to bring the bishops of the world together” for the Second Vatican Council.

The Archbishop suggested that events in the early 20th century had “profoundly affected” the Italian pontiff.

“Early in his priesthood, he served as a chaplain in the Italian army in the First World War and he experienced the unforgettable horrors of war.”

The Nuncio also referred to John XXIII’s role as Nuncio in Turkey during the Second World War when he used the nunciature to counter the effects of war and worked tirelessly and courageously to safeguard Jewish refugees persecuted by the Nazi regime.

“The events of the 20th century also had a profound effect on the other pope canonised this morning, St John Paul II. He was born after the cataclysm of the First World War, and was only 19 when in 1939 Poland was invaded by the Nazis.”

Recalling John Paul II’s years under Communism, the Nuncio stated, “It is easy for us now to forget what it was like to be a practicing catholic in Poland in the 1940s, 50s, 60s and 70s.

“The catholic faith, which had been so rooted in the Polish spirit, was constantly portrayed in the major sectors of the communist controlled society as something out dated and old fashioned, the relic of a bygone era, now discredited by the advances of science,” he stated.

He also noted that mercy was a common theme to John XXIII, John Paul II and Francis.

“Pope John XXIII had been utterly convinced that in our present age what was needed more than anything was what he called ‘the medicine of mercy’.”

“As we know, Pope John Paul II was also captivated by the experience of God’s mercy, especially as that mercy had been revealed to Sr Faustina.”

“It is quite amazing that St Faustina was canonised by Pope John Paul II on this day, Divine Mercy Sunday, fourteen years ago. And now today, he himself is canonised on the same day of the Church’s calendar.”

Archbishop Brown said that St John XXIII, St Faustina and St John Paul II were all linked by the experience of God’s mercy.

“These saints knew in their heart that the mercy of God is not an abstract concept, a pious phrase or a mathematical formula.”

“No, his mercy has a name and a face. It is Jesus of Nazareth, God made man, crucified and risen from the dead.”

Speaking after Mass, Archbishop Brown told CatholicIreland.net that he worked “quite closely with Saint John Paul II between 1994 and 2005, when he went to God.”

“But perhaps my most beautiful memories would be from before that.”

“I was at World Youth Day in 1991 in Częstochowa when Communism was still in effect and the Soviet Union was still in existence. I was privileged to be there as a young priest with some young people from the Bronx when I was in St Brendan’s parish.”

He recalled that when John Paul II came to Poland, “the outpouring of affection for him was absolutely incredible.”

“He was still quite vigorous in 1991, his health problems which appeared later on were not in evidence yet and he spoke with great force, joy and love.”

He added, “That visit in 1991 was in some ways the highlight of the pontificate.”