Nuncio says Pope’s visit to Cuba & US is significant 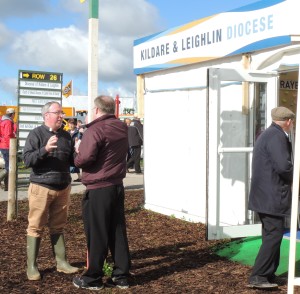 Pope Francis’ visit to Cuba and the US is “incredibly significant” according to the Papal Nuncio to Ireland, Archbishop Charles John Brown.

Speaking to CatholicIreland.net at the Ploughing Championships yesterday afternoon (Tuesday 22 September) as the Pontiff was arriving in the Archbishop’s native country, Dr Brown said, “It’s incredibly significant that he is flying Havana to Washington, an air route over which there have not been commercial flights for 50 years.”

“Only recently were commercial direct flights established between the United States and Cuba after a hiatus of 50 years and that is due to the improvement in relations between Cuba and America – and that is due in no small part to the efforts of Pope Francis,” said Archbishop Brown.

The Pope visits Washington and Archbishop Brown’s home town New York and then goes on to Philadelphia for a meeting of families.

While Archbishop Brown was sorry to miss the Pope’s trip, he was delighted to be at the Ploughing Championship for the second time.

“I’ve been in Ireland about three and half years, and this is my second experience of the ploughing,” he said.

“I was blown away last year when I came for the first time I had such a great time that I came back. It’s wonderful. It is a great celebration of all that is great about Ireland – rural Ireland, farming, and family.”

Bishop Denis Nulty was also delighted to be there and revisiting his farming roots. 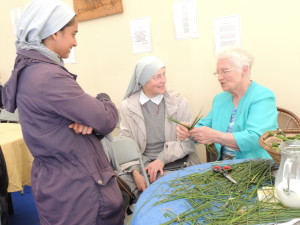 Juli Thottungal and Lucyna Wisniowska, Sisters of St Peter Claver, and Kay Mulhall of the Brigidines who is weaving a St Brigid’s cross.

“Where else on a Tuesday is there such a massive amount of people walking and talking and engaging, and that’s what we’ve got to do more and more of. The Church maybe for too long kept its head down and didn’t do enough of this so we need to do more of it now.”

One initiative at the Kildare and Leighlin stand was the ‘Poem for the Ploughing’.

People can get respite from the crowds and read six poems based on ploughing, digging and the land and the countryside, and choose their favourite.

“I love poetry thanks to my English teachers in St Pat’s in Navan Fr Joe Dooley and Fr Gerry Rice. The idea I had for the ploughing was sharing something that would give a lift to Irish life and Irish Society,” said Bishop Nulty.

The favourite poem will be announced on the last day of the event which attracts up to 80,000 people per day and concludes on Thursday 24th September.

A large team of lay people, priests and religious from the diocese and beyond are present at various times over the days and involved in everything from Accord to weaving St Brigid’s crosses, a prayer wall, sowing seeds and sprinkling salt, to Vocations Ireland.