Pope Francis would want his representative to “understand, appreciate and support,” the “rekindling of the confidence of the People of God in their spiritual leaders” in Ireland. This is especially true with the forthcoming World Meeting of Families and mindful of “the crisis that has shaken this local church”, according to the Papal Nuncio to Ireland, Archbishop Jude Thaddeus Okolo.

“We know that the Irish people are a people of faith and that faith is still there, however deeply the confidence may have been eroded,” he said when he hosted members of the Executive of the Association of Missionaries and Religious of Ireland (AMRI) at the Apostolic Nunciature in Dublin.

Stating that he is “simply a messenger” who has come to serve, he told the religious present that consecrated people continue the mission of Christ in a specific way in their consecrated life which is a radical and total response “especially in challenging situations.”

The Nuncio stated that today more than ever what is needed is a radical following of Christ, that should lead to collective action for common good. “Consecrated persons have that identity and mission. God has heard the cry of his people, and by calling you, he is responding to that cry for spiritual assistance and renewal,” he said. 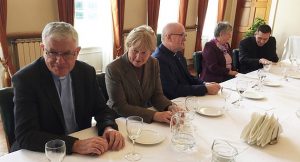 Members of the AMRI Executive

Last Thursday (1st February) on the feast of St Brigid, and just ahead of the Day of Consecrated Life, in his address to the AMRI group, the Nuncio urged them to be prophetic voices in spite of the great challenges that exist in the world of today.

“We should not seek to abandon the task of being a prophet of God just because there is a crisis, or because it is demanding, wearisome and fruitless.”

He went on to emphasise the importance of having “radical persons, prophets” who would shake people out of  their “comfort zones” while also reminding those in attendance that “prophetical voices have to be exercised with respect, prudence and with good intentions”.

AMRI came into being one year ago following the amalgamation of CORI (Conference of Religious in Ireland) and the IMU (Irish Missionary Union).