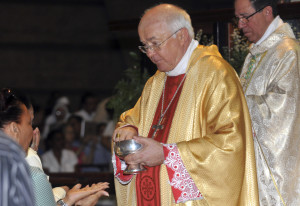 The first stage in the canonical trial against the former apostolic nuncio to the Dominican Republic, Josef Wesolowski, has been resulted in the prelate’s laicisation for his sexual abuse of children.

The former nuncio has two months to appeal the verdict.

As a citizen of the Vatican, he also faces criminal charges in the city state, which could lead to a prison sentence.

The penal trial before the Vatican judicial authorities will continue as soon as the canonical sentence has been made definitive.

Jozef Wesolowski, who is originally from Poland, was recalled by the Church last year amid claims that he had abused boys in Santo Domingo.

Wesolowski is the highest-ranking Vatican official to have been investigated for sex abuse.

The 66-year-old prelate had served as envoy to the Dominican Republic for five years. He was ordained as a priest and bishop by his compatriot, Pope John Paul II.

Authorities in the Dominican Republic have also opened an investigation but have not charged him.

He was called back to Vatican City in late August last year after the Archbishop of Santo Domingo, Cardinal Nicolas Lopez Rodriguez, informed Pope Francis of the allegations against him.

A probe was opened by the Congregation for the Doctrine of the Faith, which handles clerical sex abuse cases.

Up to now Mgr Wesolowski has been granted relative freedom of movement, as the Vatican said it was awaiting verification by the Congregation of the Doctrine of the Faith for the basis of the accusations against him.

It said all the necessary procedures would be adopted in conformity with the gravity of the case.