Nun tweets a prayer to President Trump every day 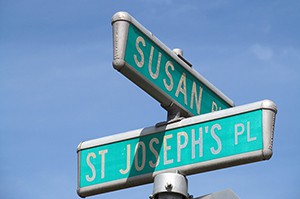 Sr Susan Francois’ blog is titled “On the Corner of Susan and St Joseph”.

Many Americans pray for their President and their other political leaders – after all the motto of the United States is “In God We Trust” – but one American nun has gone further than most in the practice.

Every morning Sr Susan Francois prays for President Donald Trump and sends him a tweet about it.

President Trump is an avid user of Twitter, using the social media platform as a way of communicating directly with his supporters. In his first year in office, from his personal Twitter account, @realDonaldTrump, President Trump issued 2,548 tweets – many of them attacking his political opponents.

Sr Susan of the Sisters of St Joseph of Peace (CSJP) isn’t as busy on Twitter as President Trump, but she is also a keen tweeter. But where President Trump is often aggressive, Sr Susan is prayerful and her messages often involve encouraging the President to be more humble.

Yesterday, for example, she tweeted:  “Dear @POTUS. 672 days later still praying you & all leaders respect & value the real human lives impacted by your policy decisions & rhetoric, especially those who are poor & vulnerable.”

POTUS is an acronym that stands for President of the United States.

In an interview with the New York Times, Sr Susan described the daily prayer and tweets are “the hardest spiritual practice I’ve ever committed to”.

The 46-year-old had been a lapsed Catholic, but after she became involved in volunteer work, she began to see a connection between social mission and the faith of her childhood. She started going to Mass again and in 2005 joined the Sisters of St Joseph of Peace, where several members of the congregation regularly prayed for President George W Bush and then for President Barak Obama.

She said she first started tweeting prayers to President Trump shortly after he was inaugurated, when the debate about fake news and “alternative facts” was just starting. She thought to herself: “I am going to go crazy if I don’t come up with some calming spiritual practice that keeps me engaged but does not add to the negativity.”

The religious sister has chosen to tweet at the President’s official account @POTUS, rather than his personal one @realDonaldTrump, because the official account is archived. “From my academic research on resistance as a response to injustice, it is important for consistency and for history to know that ordinary people didn’t look away,” she told reporter Alexander Petri.

“I wanted it to be a record of history that a Catholic sister wanted to tweet a non-violent prayer at the president. In looking back at some tweets, I realise that on 20th February of this year, I switched my format and started my tweets with ‘Dear @Potus’. Before that, I would just launch into the tweet.

“When you pray for someone every day for more than a year, you start to build some sort of a relationship, even if one-sided.”

On her Twitter home page, she describes herself as a “Gen X Catholic nun”, because she says that women of her generation bring particular nuances in perspective to religious life.  Generation X is a term used by demographers and market researchers to classify those born between the late 1960s and the mid 1980s.

Sr Susan also writes and maintains an online blog, under the title At the Corner of Susan and St Joseph, where you will find her longer reflections.

If there any Irish religious sisters, brothers or priests out there who are sending a daily prayer tweet to An Taoiseach Leo Varadkar or UK Prime Minister Teresa May, we’d love to hear about it.