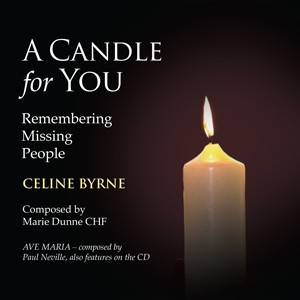 A song recorded by musician and Holy Faith nun, Sr Marie Dunne, which honours the vigil of prayer Alice Cairns has kept over the past 27 years for her missing son Philip, has just been re-released to tie in with the first ever national missing persons day.

‘A Candle for You’ was sung at the inaugural event in Farmleigh last Wednesday in the presence of the Minister for Justice, Alan Shatter, the Garda Commissioner, Martin Callinan, and the members of the families of 100 Irish people who have gone missing in the last thirty years.

The new version is sung by renowned Irish soprano, Celine Byrne, and it was released on itunes and in CD format on Friday.

The original verion of ‘A Candle for You’ ( Remembering Missing People) was performed by Patricia Bourke D’Souza and released at the Church of the Holy Spirit, Ballyroan, Dublin on 25 October 2012, after the 10am Mass at which Philip Cairns was specially remembered.

Thirteen-year-old Philip disappeared 27 years ago on 23 October 1986 while on his way back to school.

The words of the song have been inspired by his mother Alice who has said that she lights a candle for Philip each day and that this has given her the strength to face the pain experienced by her and her family – a pain so many other families in Ireland are going through.

Speaking to CatholicIreland.net in Farmleigh, Sr Marie Dunne said, “When I read that what keeps Alice Cairns going is the candle she lights for Philip, that really touched me and I felt that there was a song in it.”

Marie Dunne said that she had liaised with Alice Cairns over the song and that a number of coincidences had occurred as she was preparing it.

“I finished writing the song on 1 September which is Philip’s birthday. I imaged Alice sitting on a seat and then his school was presented with a seat. There were other coincidences.” She visited Alice Cairns on Philip’s 40th birthday this year.

Alice Cairns was accompanied by her daughter Sandra to the event at Farmleigh, where Minister Shatter invited her to assist him in the tree planting ceremony which took place in the grounds of the state house.

After the release of 40 pigeons, she told CatholicIreland.net that though she had been “able to survive and keep going, Christmas is a tough time.”

Alice Cairns appealed to anybody with any information to come forward “for their own sake as well as ours. It must be a terrible thing to have on their minds, I forgive anybody but at the same time I would like them to come forward and relieve our pain. And give hope to other people,” she said.

In his address to inaugurate missing persons day, an emotional Minister Shatter recalled the “inexplicable disappearance” of Philip Cairns in his own constituency in 1986.

“When I hear of a missing person now, I always think of Philip and the distress for his family following that terrible day and the sense of being helpless as time passed and no information about him forthcoming,” the Minister said. He added, “I know this is a feeling shared by all of you.”

Describing it as a “day of emotion, remembrance and hope”, the Minister paid tribute to the families who never give up on their missing loved ones.

He pledged to push his European colleagues to introduce a European Missing Persons Day.

Sister Marie Dunne is currently revising her Mass settings in line with the new Roman Missal and here composition ‘You Will Be My Witnesses’ was selected as a the signature song for the Year of Vocation in 2008.