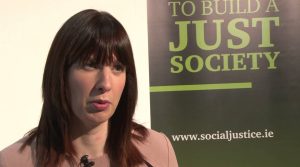 Social Justice Ireland has expressed alarm over the number of people in Ireland trapped in part-time roles which are causing increased dependency on state income supports.

According to Michelle Murphy, Research and Policy Analyst with Social Justice Ireland, “Over 100,000 people are currently working part-time hours, but would take full-time employment if they could find it.”

The figure has increased by 25 per cent since 2008 and “points to a worrying employment trend in Ireland”, according to the SJI spokesperson.

Outlining some of the key findings from the latest Employment Monitor published on Monday, Michelle Murphy warned that approximately 13 per cent of people in part-time employment are in receipt of (reduced) Jobseeker’s Allowance or Jobseeker’s Benefit.

She said this raises issues of income adequacy and the growing difficulty in generating quality sustainable full-time employment.

“Although many employment indicators are positive, hidden within headline employment figures are a number of problems, including significant underemployment, high levels of low pay, and hundreds of thousands of workers earning a wage that is below subsistence level,” she said.

Michelle Murphy stressed that “A change of narrative is required” and added that improving headline employment figures is important, but “the drive for stronger job creation should not come at the cost of diminishing job quality and security.”

“As employment numbers continue to improve, issues relating to the quality of employment and adequacy of income must figure more prominently in the policy discussion. A sustained and well-supported public investment programme can help push Ireland towards levels of employment required to properly meet demand whilst addressing some major infrastructural deficits in areas such as social housing, broadband and other necessary capital infrastructure,” Michelle Murphy commented.

The SJI researcher said that in order to deliver such a public investment programme, Ireland needs a new economic model: “One that generates the necessary revenue to provide the services needed and that creates decent and appropriate employment for everyone in the country who wants it.”