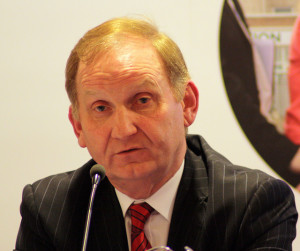 Ruhama has welcomed a landmark vote in Northern Ireland which will make the purchase of sexual services a criminal offence while decriminalising those in prostitution.

The Human Trafficking and Sexual Exploitation Bill was introduced by DUP MLA Lord Morrow and contained measures in Clause 6 to criminalise the buying of sex while decriminalising soliciting for those involved in prostitution.

Responding to the news, Sarah Benson, CEO of Ruhama said, “This Bill, which has support from the majority of the political parties in Northern Ireland, sends out a strong signal that those who buy sex, will be held accountable for their key role in fuelling organised crime and perpetrating abuse against victims of trafficking and exploitation.”

She said Ruhama, as a frontline service, supporting women and girls across the island of Ireland, support measures which “explicitly decriminalise those in prostitution, while simultaneously targeting the source of demand for the commercial sex trade”.

Ruhama gave evidence to the Northern Ireland Assembly during the Committee State of the Bill, outlining its experience of working at the frontline with women affected by prostitution and sex trafficking.

The Ruhama spokeswoman commended Northern Ireland’s Justice Committee for the extensive consultation they carried out, in developing what she termed as a comprehensive Bill which not only includes criminal sanctions against sex buyers, but also a commitment to provide support services for those in prostitution.

“Other countries have successfully taken the step to criminalise the purchase of sex. Norway earlier this year published an evaluation of its law to criminalise the sex buyer and found that it had been effective in reducing exploitation in the sex trade, and had not an unintended consequence for those in prostitution. There was no indication of an increase in violence for example, as some critics had suggested would occur,” Sarah Benson said.

She added that the sex trade will always be inherently dangerous.

“This is why Ruhama advocate for this legal approach which will reduce the incentive to exploit and abuse vulnerable persons in the sex trade, by targeting the customer base of pimps and traffickers for sanction, rather than those in prostitution.”

Ms Benson said an all-Ireland approach was necessary to combat the serious crimes of sex trafficking and organised prostitution.

She said it was “crucial” that the Minister for Justice, Frances Fitzgerald followed the move in Northern Ireland by implementing legislation to criminalise the purchase of sexual services in the Republic.

“This will ensure that the whole island of Ireland sends a clear message that society is determined to minimise the harm of this horrendous crime and avoid becoming a safe haven for sex buyers, pimps and traffickers.”