“Non violence is not just about anti-war rhetoric”: Cardinal Turkson 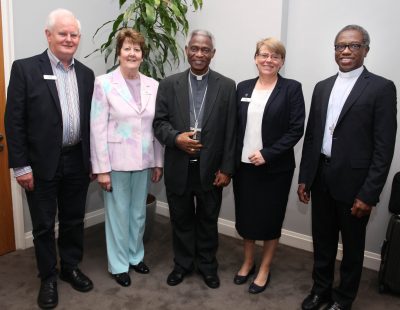 The Prefect of the Vatican’s Dicastery for the Promotion of Integral Human Development, Cardinal Peter Turkson, has said non-violence is not only about being anti-war but is also about upholding the dignity of every human person.

In his keynote address to the Autumn Conference of the Association of Leaders of Missionaries and Religious of Ireland (AMRI) in Dublin titled “Mission Today in Our Common Home”, Cardinal Turkson said that if the point of departure is the Church’s social teaching on the dignity of every human person, then the first form of violence is to disregard the rights and dignity of people in society.

He told 155 participants from over 50 congregations, societies of apostolic life and other affiliated lay groups, “When we fail to regard and promote the rights and the dignity of people in society, we do violence to them.”

Elsewhere in his address at the Emmaus Centre in Swords, Co. Dublin, the Ghanaian prelate said the Pope is concerned that our values system in relation to economics “is upside down”.

Speaking about the Extraordinary Month of Mission, the Cardinal reminded his listeners that the Church was marking the 100th anniversary of Maximum Illud, Pope Benedict XV’s document on mission.

He described the document as “a very far-sighted encyclical”.

“One hundred years ago this encyclical called on the Church to open up to new conditions of missionary work, to open up to different cultural expressions of the gospel, to open up especially to prepare missionary lands to be self-reliant in personnel and activities.”

He added, “So Maxmimum Illud opened up the horizons of the Church as a missionary Church, to serving in new conditions.”

Discussing the mission of the Church today, Cardinal Turkson stressed that, “Anybody who has a mission, first must have a vision. If there is no vision, there can be no proper mission.” 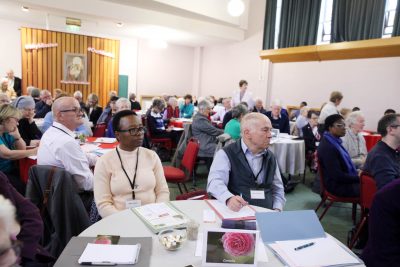 He told the conference’s delegates that the vision for them was their “personal experience and encounter with Jesus which inspires and enlivens everything” they do.

Elsewhere in his address, Cardinal Turkson identified four “signs of the times”, the first of which is the ecological crisis, climate change and global warming.

“This is a sign of the times that invites us to a particular form of mission that we can carry out by hearing the cry of the earth and the cry of the poor.”

Other signs of the times include the growing inequality in communities between the rich and the poor and a throwaway culture that sees so many abandoned and discarded. A third sign of the times is the threat of war to global security. Cardinal Turkson expressed concern over the US decision to suspend its involvement in the nuclear arms control treaty with Russia.

The fourth sign of the times he identified was the impact of the abuse scandals which he said tended “to suffocate everything” that the Church was doing.

Speaking after the conference to CatholicIreland.net, Sr Liz Murphy, Secretary General of AMRI, explained that the overall theme of the conference, “Mission Today in our Common Home”, was based on one of the four Goals of AMRI. 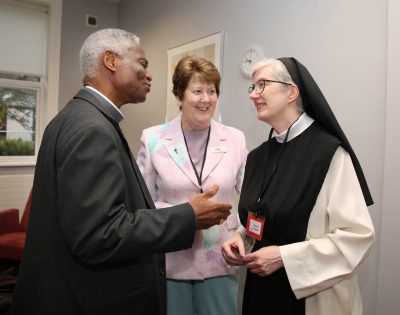 Cardinal Peter Turkson speaks with Sr Liz Murphy, secretary general of the Association of Leaders of Missionaries and Religious of Ireland, and Sr Eleanor Campion at AMRI’s conference on 3 October at the Emmaus Centre in Co. Dublin. (Pic: John McElroy)

“AMRI’s Goal of Mission and Dialogue states: ‘Inspired by the Gospel and Church teaching AMRI as a centre for mission and dialogue promotes collaboration by engaging with existing and emerging realities in the Church and wider society’.

“The emerging realities today include climate justice, homelessness and concern for people on the margin such as refugees and their plight. Cardinal Turkson was a key contributor to Laudato Si’ and as the head of the Dicastery on Integral Human Development he was an obvious choice to lead us and direct us on these very issues.

“I approached his office requesting him to be our guest speaker and with the support of our Papal Nuncio he agreed to our request despite his very busy schedule as one of the people present at the Synod on the Amazon which started on Sunday.”

From his two addresses to the conference, she was particularly interested by what he had quoted from Pope Francis’ address on 1 October when Pope Francis referred to the Extraordinary Month of Mission in relation to the parallel between mission and omission.

“Our common baptism calls us to be missionaries in new ways, responding to the many ‘signs of the times’ but only if this is rooted in prayer. Omission comes from fear, a ‘poor me’ approach and a sense of being suffocated by some of our past ‘sins’,” Sr Liz Murphy said.

“In his address on Laudato Si’ [Cardinal Turkson] outlined how this came to be written, its invitatory tone, and how it impacts the life of us all in so many ways as co-creators with God. It was very challenging to hear him name the six Cs as ways of addressing ‘the cry of the earth’ and ‘the cry of the poor’: Continuity, Collegiality, Conversation, Care, Conversion and Contemplation.”

Sr Kathleen McGarvey, President of AMRI, responded to Cardinal Turkson at the conference. In her address, she said Ireland had traditionally been a missionary Church.

“I would argue that we have been missionary in a one-directional sense, that of sending missionaries and sending support abroad. We in Ireland have not been used to receiving.”

Though Irish church personnel could claim to have been pioneers of the Church in places such as Ghana, today the Church in Ghana, like in so many African and Asian countries, “is dynamic,” she stated.

“These vibrant churches are today very much aware of their missionary call and they are aware that they too are baptised and sent to be missionaries to the ends of the earth.”

The fact that Ireland is now mission territory means we must open our doors to receiving more missionaries from abroad, Sr Kathleen said.

“I believe that it is difficult for us here in Ireland to accept and to admit that we need to receive, including even in our own missionary institutes and among our members, because we have been used to sending and giving.”