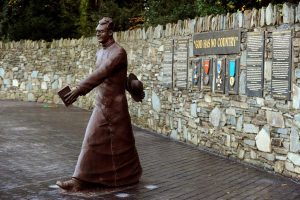 The awards are named in honour of the Killarney monsignor who saved thousands of lives in Nazi-occupied Rome during World War II when he hid anti-fascists, Allied escapees, Jews and others from the Gestapo in a number of safe houses, including convents, throughout Rome.

On the day Rome was liberated, 4 June 4 1944, his organisation was still successfully hiding almost 4,000 people despite the efforts of the Gestapo to recapture them.

After the war, Monsignor Hugh O’Flaherty was awarded the highest of honours, including Commander of the British Empire and the Congressional Medal of Freedom, and was the first Irishman named Notary of the Holy Office.

In November 2008, in recognition of his immense humanitarian deeds, the people of his home town of Killarney posthumously presented the Killarney Humanitarian Award to Monsignor Hugh O’Flaherty. For subsequent years, the award was renamed in his honour and presented to worthy recipients.

In 2013, to mark the 50th Anniversary of the monsignor’s death, a magnificent life-size bronze memorial was unveiled on Mission Road in Killarney. It is the work of Valentia-based artist Alan Ryan Hall.

This week, the Monsignor Hugh O’Flaherty Memorial Society has confirmed that nominations for the 2017 Humanitarian Award are being sought from individuals from around the world, as well as from voluntary organisations and humanitarian NGOs based at home or overseas.

Last year’s winner was PREDA founder and Dublin-born Columban missionary to the Philippines Fr Shay Cullen, who has led a campaign defending oppressed and exploited women and children in the south-east Asian country for almost 50 years.

Submissions must be no longer than 500 words, and organisers urge nominators to clearly outline why they feel the individual, team or organisation they support merits consideration by the committee.

The Society has also confirmed that an independent panel will trawl through the nominations and recommend a recipient, with the winner announced in August prior to the presentation on 4 November.

Further information can be found at www.hughoflaherty.com.