Home > Featured > ‘No reports of racism against Polish immigrants in Ireland’

‘No reports of racism against Polish immigrants in Ireland’ 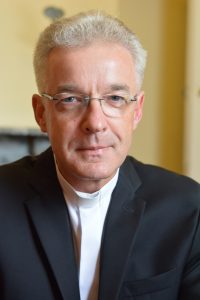 The Chairman of the Polish Bishops’ Council for Emigrants, Bishop Wiesław Lechowicz, was in Dublin last weekend to celebrate the 170th anniversary of the dedication of St Audoen’s Church which is now home to the Polish chaplaincy.

Speaking to CatholicIreland.net, Bishop Lechowicz said his presence in Ireland was a symbol of the gratitude of the Polish Church for the understanding Polish immigrants had found in Ireland.

Discussing the challenges and issues for migrants and emigrants, Bishop Lechowicz told CatholicIreland.net, “In Poland we differentiate between integration and assimilation. Assimilation means cutting off the roots, integration we understand as integrating with what is most important in the life of this country with preserving the roots.”

Speaking through an interpreter, he continued, “Whenever I go overseas I encourage the Polish immigrant communities to integrate with the local Church and respect the laws of the country that welcomes them.”

“Whoever I talk to, whether it is church authorities or the state authorities, I urge them not to mix integration with assimilation.”

He explained that he sometimes cites the example of the Irish community in London who are English-speakers but still have a chaplaincy in order to “preserve the distinct value of Irish culture”.

Bishop Lechowicz called for the politics of the refugee crisis to be set aside so that refugees can helped as human beings in need.

He said the Polish Church believes that refugees should be treated with mercy and love. 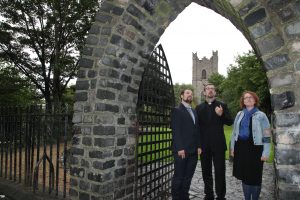 Pic shows Fr Stanislaw Hajkowski SCHR (Co Ordinator of the Polish Chaplains in Ireland and Rector of St Audoen’s Church) Andrzej Trala (member of the organising committee for the celebrations) and Dorota Jozefiak (who will lead the special anniversary concert on the 25th September) looking at an archway in St Audoen’s Park before the anouncement of the celebrations. Pic John Mc Elroy.

“The Church is aware that about 20 million Polish emigrants – refugees among them – left Poland after the Second World War and were welcomed by a number of countries, especially the United States.”

He said the Polish state’s policy at the moment was to reduce the number of immigrants permitted to settle in Poland and that this was a decision of the state not the Church.

In addition to refugees from the Middle East, Eritrea and Sudan, “Poland faces an influx of immigrants from Ukraine where there is war,” the Auxiliary Bishop of Tarnów said.

Asked about anti-Polish graffiti in Britain in the wake of the vote for Brexit, Bishop Lechowicz, who is charged with pastoral care of Polish emigrants, said they were “isolated incidents” and that there had been no change in the attitude of the British authorities towards Polish immigrants.

He stressed that immigrants, including Polish immigrants, should respect local traditions and nuances.

“We do not hear in Poland about any forms of racism or discrimination in Ireland,” the bishop commented.

The Mass to mark the 170th anniversary of St Audoen’s Church in Dublin is part of a series of events taking place over September and October to tie in with a number of significant anniversaries for the church and its parishioners.

Speaking to CatholicIreland.net, Fr Stanislaw Hajkowski SChr of St Audoen’s said a special Mass of thanksgiving is taking place this Sunday on 25 September at 6pm to mark the tenth anniversary of the passing St Audoen’s church to the Polish Community in Ireland.

Archbishop Diarmuid Martin of Dublin will act as the main celebrant and as homilist and concelebrants will include Bishop Ray Field, Chairman of the Council for Immigrants and Rev Ryszard Głowacki SChr, Superior General of the Society of Christ.

The Mass will be followed by a special anniversary concert of Polish medieval and modern sacred music. The choir, which will be drawn from St Audoen’s Church and other Polish chaplaincies, will be under the baton of Dorota Józefiak.

On 15 October, five historians specializing in the history of the Middle Ages, two Irish, two Polish and one from Denmark, will present their papers in English.

Fr Hajkowski explained to CatholicIreland.net that “in the tenth and eleventh century many Irish monks went to Poland to proclaim the Good News. Now, in many Irish dioceses the Polish chaplains serve both, the Polish and Irish communities. Close to 20 Polish priests serve only Irish communities – it is like a favour returned after ten centuries.”

The conference is taking place on 15 October in Glendalough Hotel and is open to the public. Those interested to participate are asked to write an e-mail with a name to: [email protected] in order reserve place.