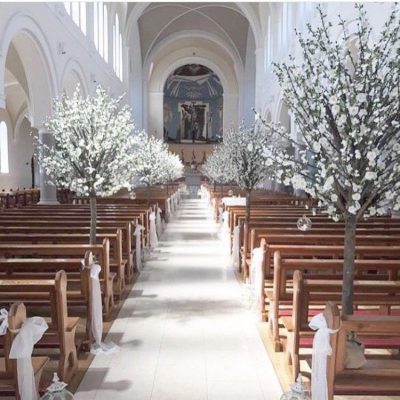 A tree-mendous effect? Or a blooming disaster? A Wicklow priest refused to allow decorative trees like these in his church.

The idolatry of money is still an issue within the Church, according to Pope Francis.

In his homily during Friday’s Casta Santa Marta Mass, the Pope reflected on St John’s Gospel account of the cleansing of the Temple. He said due respect needs to be given to churches as “houses of God”, and they should not be transformed into markets or social lounges dominated by worldliness.

Pope Francis said he had come across instances where priests had posted price lists for sacraments, when access to the grace of God should be free of cost. While the price lists are “suggested offering amounts”, the Pope said offerings are to be given secretly without anyone noticing.

Another danger that Pope Francis warned about was the temptation of worldliness, saying that in some Church-based celebrations and commemorations it was hard to make out if the venue was a place of worship or a social parlour. Recently a priest in Wicklow priest refused to allow a wedding to go ahead because of a plan to decorate the main aisle with cherry blossom trees.

“Celebrations must be beautiful, not worldly,” said Pope Francis. “Because worldliness depends on the god of money, which is idolatry.”