The adoption of the UN Treaty on the Prohibition of Nuclear Weapons has been warmly welcomed by Uachtarán na hÉireann, Michael D Higgins.

In a statement coinciding with the opening up of the treaty for signature by the heads of national governments around the world, President Higgins hailed it as ‘the world’s first legally-binding treaty prohibiting the development, testing, manufacturing, purchasing or possessing of nuclear weapons’.

And he further described it as “a necessary re-affirmation by the representatives of the people of the world of their abhorrence of the continued threat of nuclear weapons”.

At present, there is thought to be nine states worldwide with nuclear weapons – China, France, Israel, North Korea, Pakistan, the Russian Federation, the United Kingdom and the United States of America. Between them, they have more than 15,000 nuclear weapons, enough to wipe out the whole of humanity and to destroy the planet five times over. 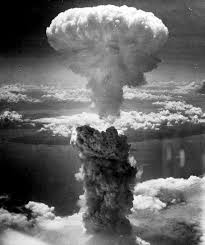 A mushroom cloud created by a nuclear explosion — hopefully, this sight will become a thing of the past.

No wonder such weapons of mass destruction have been condemned as immoral by the Church – with the Second Vatican Council specifically opposing the use of the nuclear threat, cf Gaudium et Spes (80).  More recently, in March this year, Pope Francis wrote to a UN congress promoting this treaty, pointing out that nuclear deterrence is ineffective against the principal threats to 21st century well-being: terrorism, cybersecurity, environmental problems and poverty.

Yesterday, President Higgins said, “The Treaty on the Prohibition of Nuclear Weapons, adopted in July this year, and now formally signed by a large number of UN member states, marks both a significant moment in history and a highpoint of international cooperation. As President of Ireland, I welcome the adoption of this Treaty banning the development, testing, manufacturing, purchasing or possessing of nuclear weapons.”

President Higgins pointed out that ever since Ireland joined the United Nations in 1955, it had been a lead country in promoting and advocating the implementation of the Nuclear Non-Proliferation Treaty. He congratulated the officials of Ireland’s Department of Foreign Affairs and Trade for their role in bringing about this new treaty.

“The Treaty on the Prohibition of Nuclear Weapons is the result of decades’ worth of work by a number of determined countries, among which Ireland played a prominent role ” he said. “I salute all those countries in the Core Group of States who initiated this process. That they did so in close cooperation with activists and researchers in civil society organisations around the world, is a further ground for hope.”

He also had little time for any naysayers who argued that the new treaty is of little good while the nuclear powers hold on to their nuclear arsenals. “The adoption and coming into force of the Treaty marks the widespread acceptance of the threat to humanity posed by nuclear weapons,” he said. “Those critics who have opposed and decried this Treaty as being without merit unless it had the assent of those who insist on retaining nuclear weapons are suggesting little less than a veto for the existing nuclear powers on policy making in this area.”