Home > Featured > No bones about it: Archaeologists convinced remains are those of Britain’s first abbess

No bones about it: Archaeologists convinced remains are those of Britain’s first abbess

Church historians and architects are convinced that they have identified the mortal remains of St Eanswythe, a Kentish princess who became England’s first abbess circa 660AD. She is considered to be one of Britain’s earliest saints.

A collection of human bones, inside a battered lead container, were found by workmen nearly 135-years-ago at a Church in Folkestone. There was much local debate as to whether or not these remains were a first-class relic of St Eanswythe. Strongly in favour of the proposition was the fact that the long lost remains had been found in the Church of St Mary and St Eanswythe, the first church in England to bear the abbess’s name. 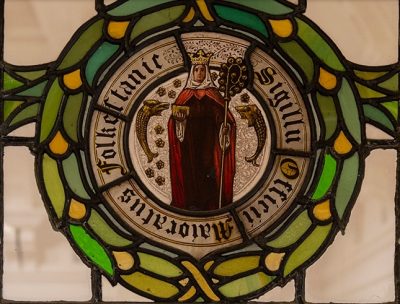 Thanks to the National Lottery (UK) Heritage Fund, Folkestone Museum and Canterbury Archaeological Trust were able to embark on a three year ‘Finding Eanswythe’ research project that included  carbon dating the remains. and the container. Tests reveal that bones belong to a woman, who died aged between 17 and 20, sometime in the mid-seventh century, making it highly likely that these are the remains of the Saxon saint and princess.

“We can now say it is indeed highly probable that we have the remains of one of the earliest Anglo-Saxon saints and the only surviving remains of a member of the Kentish royal house,” said Dr Andrew Richardson of the Canterbury Archaeological Trust. “There is still much more work that we can do to find out more about her personal story but for now it is remarkable that we can place Folkestone’s patron saint in the very church that bears her name.”

The lead reliquary is from the eighth or ninth century and its construction includes parts from a Roman-style coffin. It is believed the reliquary was hidden in the walls of the church during the 16th century, at the time of the Dissolution of the Monasteries, when Henry VIII was keen to suppress Catholic sources of income such as shrines to particular local saints.

The archaeological trust is currently fundraising for DNA testing of some of the bone and tooth found in the hope that it might reveal information about the saint’s hair and eye colour. Testing could also provide details of the ancestry of this woman descended from the Kings of Kent, as well as information about her diet and her general health.

In the meantime, Folkestone Museum is running a major exhibition about Eanswythe and ‘The Afterlife of an Anglo-Saxon Saint’.