Nine ordained to priesthood by Archbishops of Armagh and Tuam 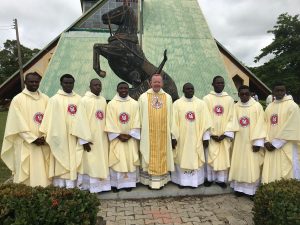 The Archbishops of Armagh and Tuam ordained nine men to the priesthood at the weekend in locations as far apart as Abuja in Nigeria and Westport in Co Mayo.

Archbishop Eamon Martin was in Nigeria at the invitation of the Missionary Society of Saint Paul (MSP) to preside over the ordination of eight new priests.

The open-air ordination Mass was attended by thousands of family and friends of the ordinands.

There are currently eight MSP priests serving in Ireland in the dioceses of Armagh, Ardagh & Clonmacnois, Elphin and Kilmore.

Fr Anselm Emechebe, one of three MSP priests serving in Armagh, and Mission Superior of the Society in Ireland, accompanied Archbishop Martin to Abuja.

The Archdiocese of Armagh sponsors a number of the MSP seminarians in their training, as well as sponsoring an MSP priest in his postgraduate doctoral studies in Rome where the priest stays at the Pontifical Irish College.

Archbishop Martin is not the first Archbishop of Armagh to participate in the ordination of Missionary Society of Saint Paul (MSP) seminarians.

In 2006, Cardinal Sean Brady was invited to Nigeria to ordain ten MSP priests. Bishop Leo O’Reilly of Kilmore ordained MSP priests in 1999 and previously taught at the seminary in Nigeria.

Many Kiltegan missionaries worked in Nigeria and were instrumental in the initial formation and growth of the MSP.

Over the years, MSP members have studied in Ireland during their formation. Bishop Hyacinth Egbebo MSP, Apostolic Vicar of Bomadi, formerly served in the parish of St Patrick, Dundalk in the Archdiocese of Armagh, before he returned to Nigeria.

The Missionary Society of Saint Paul was founded by the late Dominic Cardinal Ekandem and was established by the Catholic Bishops’ Conference of Nigeria on Mission Sunday 23 October 1977.

There are close to 300 MSP priests working in 19 countries across Africa, Europe and the Americas. There are also 100 seminarians in formation in the National Missionary Seminary in Nigeria.

Speaking after the ordinations, Archbishop Martin said, “It has been a great joy for me to preside at such a significant moment for the Church in Nigeria. Everywhere I go I sense the deep gratitude felt here for the Irish missionary priests and religious who contributed immensely to society and the Church here.”

Next year the nine will be sent to countries all over the world on mission.

Noting that eight priests of the Society are already working in parishes in Ireland, the Primate of All Ireland said it was his hope that African missionaries would “help contribute to the new evangelisation of Ireland. They are our children and grandchildren in the faith.”

He also recalled how over the years hundreds of Irish missionaries have worked in Nigeria.

“Now we are blessed that the Church in Nigeria is generously sending her missionaries back to us. It is a wonderful exchange – our faith is about giving and receiving, and the reality of today is that in many ways Ireland is ripe for mission and new evangelisation.”

He said that Pope Francis likes to see the Church operating through the lens of mission.

“From now on our focus must be on replanting and nourishing the seed of the Gospel. Our emphasis in the Church in Ireland is now on mission, rather than maintenance. Who knows, we might soon become a missionary nation again.”

Meanwhile, on Sunday in the Archdiocese of Tuam, Archbishop Michael Neary welcomed family and friends to the ordination of Fr John Regan, a member of the Pallottine Order.

In his homily, Dr Neary thanked God for the Society of the Catholic Apostolate, better known as the Pallottines, which was founded by St Vincent Pallotti in 1835.

The aim of the Pallotines is to increase collaboration among diocesan priests, male and female religious and the laity.

Dr Neary noted that the Pallottine founder was especially marked by the deep desire to revive faith, to rekindle charity as he worked with rich and poor alike.

St Vincent Pallotti taught that every human being is a mirror of God, worthy of reverence and love. He also proclaimed that the role of each Christian is to be a sacrament of Christ’s presence in the world.

“Today we realise how relevant and how urgent that message of St Vincent is for Ireland,” Archbishop Neary said.

He said Fr John Regan was assuming his new responsibility as a priest at a time of rapid change in Ireland and in the Church.

“The sociological props which were there in support of faith in the past are being belted away one by one. This can impinge on people of faith in general and on priests and on future priests in particular in two ways.”

“On the one hand there is the temptation to accommodate and compromise in our faith and its implications for lifestyle. On the other hand, it is an opportunity for us to deepen our faith and respond in a courageous way as we cope with the challenges of a culture which at times is endeavouring to behave as if God did not exist.”

“Ours is a time for deepening of faith and responding with courage.”

Archbishop Neary said that in his exercise of priestly ministry, Fr John would return time and again to the words of the risen Lord to his disciples in the Gospel of Matthew: “Go make disciples of all nations, baptising them in the name of the Father, and of the Holy Spirit; teaching them to observe all that I have commanded you; and behold, I am with you always, to the close of the age”.

All of this may at times appear to be counter-cultural and a huge challenge but Fr John must keep in mind Jesus’ final words to his disciples: “Behold I am with you always to the end of time”.