Home > Featured > Nigerian missionaries commended for their work in Ireland

Nigerian missionaries commended for their work in Ireland 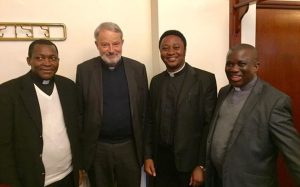 A number of Irish bishops, led by Archbishop Eamon Martin of Armagh, marked the fortieth anniversary of the foundation of the Missionary Society of St Paul of Nigeria in Ireland last week.

The society, with the support of the Kiltegan missionaries, was founded in response to a challenge from Pope Paul VI to Nigerians not just to welcome missionaries but to be missionaries.

Archbishop Martin was joined by Bishop Leo O’Reilly of Kilmore, Bishop Francis Duffy of Ardagh and Clonmacnoise and Bishop Kevin Doran of Elphin.

Their dioceses have, in recent years, welcomed and benefitted from the service of members of the Missionary Society of St Paul in a bid to offset the decline in priest numbers.

Speaking to those gathered to celebrate the anniversary, Fr Victor Onwukeme, MSP Superior General, commended the Nigerian missionaries “for the great work they are doing here in Ireland”.

In his address, he said that some years back Nigeria received a lot of missionaries from Ireland.

“Those missionaries were brave men and women. Some of the priests belonged to one religious congregation or the other while others were diocesan priests. Those men and women defied our excruciating heat; they did not mind our strange language, our mosquitoes, scorpions and snakes, our strange food, strange environment and so forth.”

He also reminded the congregation that in 1976 Pope Paul VI had said to the African bishops gathered in Kampala Uganda, “You Africans have received a lot of missionaries, now you too must become missionaries.”

Dominic Cardinal Ekandem took the words of the Pope to heart and this led to the founding of the Missionary Society of St Paul in 1977.

He noted that St Patrick’s Missionaries or the Kiltegan Fathers did a lot in order to see that the missionary congregation saw the light of day.

“So we are here because you first came to us. We are the fruit of your labour. Today, many Churches in Nigeria are named after St Patrick. St Patrick is the second patron of Nigeria after Our Lady.”

When Cardinal Sean Brady was invited in 2006 to ordain a group of young priests for the Society, he said he had ordained that day more priests in Nigeria than he had in his own diocese.

Fr Onwukeme said the members of the MSP continued to pray that vocations would come back to Ireland.

“Maybe MSP was founded in order to fill the gap until vocations come back to Ireland. God works in mysterious ways,” he said.