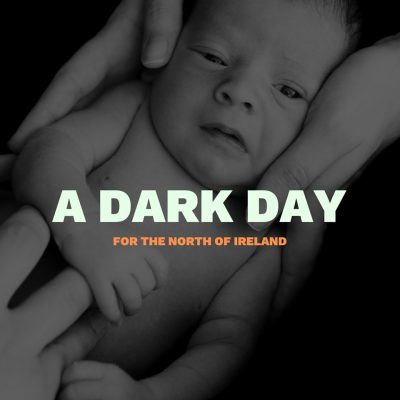 The leader of the Democratic Unionist Party, Arlene Foster, has vowed to continue to fight against new abortion laws which will be imposed on Northern Ireland following a failed attempt in Stormont to prevent their introduction on Monday.

“This is not the end of the matter as far as this party is concerned. We will take every possible legal option open to us,” she said in the Northern Ireland Assembly.

She added that if legal action fails, Northern Ireland will have the most liberal abortion laws anywhere in Europe.

Activists from both sides of the abortion debate held protests at Stormont as the Assembly met for the first time in almost three years to try and block the laws which have been drawn up by MPs in Westminster.

There has been no devolved government since January 2017 and on Monday a Speaker had to be elected by both Unionists and Nationalists if the Assembly was to be able to address the proposed abortion laws.

However, when the Assembly convened on Monday 21 October, many parties, including Sinn Féin, were not present in the chamber which made it impossible to elect a Speaker.

As business could not proceed, the proposed fast-tracking of private members’ legislation, the Defence of the Unborn Child Bill 2019, to protect the unborn, was stymied.

“A dark day for the North of Ireland,” is how Aontú responded. “Many people are brokenhearted and angry at Sinn Féin and the SDLP facilitating the Westminster Abortion Bill becoming law today,” stated Aontú.

However, Sinn Féin, the SDLP and other political parties described the DUP effort to get the Assembly up and running after a thousand days of inaction as a stunt. The SDLP walked out of the Assembly in protest.

More than 71,000 people had signed a petition seeking the restoration of the NI Executive in order to try and stop the change in the abortion law.

The TD resigned from Sinn Féin when he was suspended over his pro-life views. He subsequently set up Aontú.