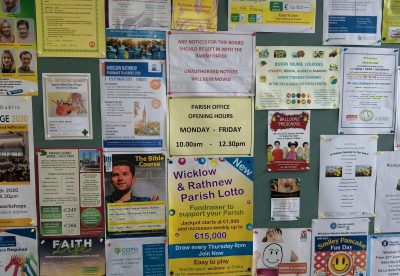 A new pastoral centre for Wicklow town was officially opened and blessed by Archbishop of Dublin Diarmuid Martin yesterday (Sunday).

Up and running for nearly a year, the De La Salle Pastoral Centre is used on a regular basis by about 40 different community groups, ranging from Wicklow Male Voice Choir to Wicklow Girl Guides, and Bible study groups to board gaming.

In total, the centre has nine meeting rooms, though some of these are relatively small in size; most are the size of a secondary school classroom. The largest room is, of course, the school’s old assembly hall and it now has an en-suite high-spec kitchen. Additionally, there is a small kitchen serving the three upstairs meeting rooms.

The main hall is usually at its busiest on Monday nights, when it hosts the parish bingo from 8pm onwards. It also plays host to meetings of Wicklow Welcomes, an organisation providing support to asylum seekers lodged in direct provision centres in the town and surrounding district.

Before the official opening and blessing, the Archbishop celebrated 11.30 a.m. Mass in St Patrick’s Church next door.  In his homily, he reflected on how Christ’s message is handed on from one generation to the next.

“The challenge for the Church in every new generation is to ensure that the Church does not become just a much-loved relic of the past, a type of museum to another time, loved and respected by all, but marginal to their lives,” he said.

St Patrick’s Church is a much-loved building in Wicklow. Sited prominently above the town, it overlooks all of Wicklow Bay. The parish priest is Fr Donal Roche and the curate is Fr Pat O’Rourke, and both men were warmly praised by the Archbishop for their energy and activity. Throughout Lent the parish is running additional services, including Taize services at 5 p.m. on Sundays, Lectio Divina on Wednesdays at 10.45 a.m. in the nearby Dominican Ecology Centre, and ‘A Day of Mercy’ on Saturday February 29, when the Sacrament of Reconciliation will be available from 10 a.m. to 8 p.m. at the parish church.

“When he came down here from Dublin, he was 76,” said Archbishop Martin. “I am 74, but Archbishop Murray did make the journey down from Dublin on horseback.”