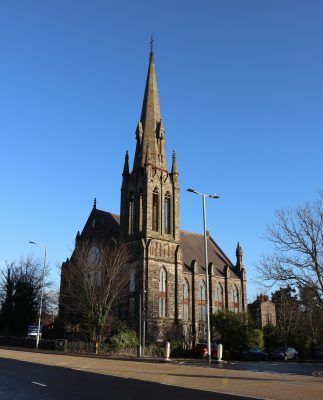 Belfast’s Fortwilliam and Macrory Presbyterian church is to have a new lease of life as a place of Christian worship with a regular Catholic Latin Mass.

The church has been purchased by a young Catholic religious community, the Institute of Christ the King Sovereign Priest. Canon Joseph Heppelle and a seminarian arrived in Belfast on Monday (14 October 2019) to take up ministry there.

‘The Presbyterian community received with joy and hope the offer made by The Institute of Christ the King Sovereign Priest,’ the Institute stated. It also stated it was ‘very grateful to the Elders and community at Fortwilliam and Macrory Presbyterian church for the opportunity to take over this sacred building, which will remain open for Christian Worship.’

It expressed ‘profound’ gratitude to Bishop Noel Treanor of Down and Connor for the permissions to pave the way for acquisition of this church.

Canon Wulfran Lebocq, who lives in Limerick where the Institute started in Ireland, has been visiting in Belfast and offering Mass in Latin for the last seven years. He told CatholicIreland.net that attendance is currently at around 70.

‘People are very happy, there is great motivation, great interest, for the Latin liturgy and everything that goes with the traditional liturgy especially the beauty in the music and the use of the beautiful vestments. People are very touched by the sacredness of the liturgy,’ he said.

Canon Lebocq, who is originally from France, added that the traditional liturgy is very popular among young people, and that is not just in Ireland.

‘It is something worldwide. Young people are very attracted by the traditional liturgy, there is a great interest because they know the liturgy is founded in great respect, prayer and thankful adoration and the church’s teaching,’ he explained.

Founded in 1990, the Institute of Christ the King Sovereign Priest is a Roman Catholic Society of Apostolic Life of Pontifical Right in communion with the Holy See. The Institute was invited to Ireland by the Diocese of Limerick and established its headquarters there in 2006. The Pro-Provincial and Prior of Sacred Heart Church in Limerick is Canon Lebocq.

He explained to CatholicIreland.net that the Sacred Heart Church, which his institute purchased, was to become a leisure centre and bar. Located at The Crescent in Limerick city centre, it was on the market with a price tag of €4 million. It remained unoccupied for at least six years and was sold for less than a quarter of the price to the Institute, which has been restoring it to its former beauty.

‘We are Canons, we live in community, that means we must offer God a beautiful liturgy, and pray and sing together, and at the same time keep the church open so people can benefit from the beauty of the liturgy and Divine office, also have the sacraments available,’ he said.

The Institute depends on donations to pay for and continue the restoration of the Limerick church. The cost of purchasing the Fortwilliam and Macrory church has been met by an interest free loan, which the Institute will repay over the next five years.

The Institute of Christ the King celebrates the classical Roman Liturgy, the Latin Mass, in its Extraordinary Form, according to the liturgical books promulgated by Saint Pope John XXIII in 1962. This liturgy was promoted by Saint John Paul II, Pope Benedict XVI and Pope Francis in various documents.

It follows the spirituality of St Francis de Sales, which is expressed in its ‘Live the truth in charity’. Schools, youth camps, days of recollection, and musical training are included in its many activities. Its 115 priests work across the globe with special emphasis on the harmony between faith and culture, and promoting the arts, especially sacred music and architecture.

The mother house and international seminary is based in Florence, Italy, where there are currently 90 seminarians. It also has over 50 religious sisters, devoted to the Sacred Heart of Jesus, who live a semi-cloistered life, and 17 oblates (lay brothers). Among these are several Irish vocations.

The average age of this community’s members is 24 for seminarians, 28 for sisters, 41 for oblates and 39 for priests. The community has missions in Gabon (Africa) and is also in the US, England, France, Spain, Belgium, Switzerland, Austria, Germany, Sweden and Rome. Founder, Monsignor Gilles Wach, was ordained to the priesthood by Saint Pope John Paul II in Rome.
See website: www.institute-christ-king.ie.