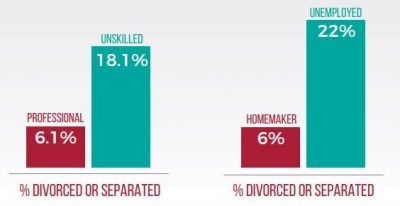 New research published by the Iona Institute has found that unskilled workers are more than three times more likely than professionals to be divorced or separated in Ireland.

The pro-family, pro-life think tank’s research is based on the results of Census 2016.

According to its analysis, 6 per cent of professional workers were separated or divorced, compared with 18 per cent of unskilled workers.

The overall rate for divorce or separation in Ireland was 11 per cent.

The findings were published as the country prepares to go to the polls later in the year in a referendum on the current divorce laws.

The 2019 divorce referendum follows a private members’ bill sponsored by Minister for Culture, Heritage and the Gaeltacht, Josepha Madigan, which seeks to shorten the waiting period for those seeking a divorce from four out of five years to two out of three years.

The new research is a follow-up to that issued by the Iona Institute in 2016 which showed that marriage rates also differ hugely by occupational status and social class. That research found that unskilled workers are only half as likely as professionals to be married (66 per cent compared to 32 per cent).

According to the Iona Institute, the two pieces of research show that occupational status and social class make a major difference as to whether someone marries and stays married. Unskilled workers are far less likely to get married and are more likely to have suffered a broken marriage, compared with upper income workers.

Commenting on the findings, Dr Patricia Casey, Emeritus professor of psychiatry at UCD and a consultant psychiatrist in the Mater Hospital in Dublin said, “Low income is a very big predictor of whether someone will experience a broken marriage. Conversely, those on high incomes are far less likely to have done so.

“A difference of three to one is extremely significant by any reckoning. When we combine this with the fact that only 32 per cent of unskilled workers aged 18–49 are married in the first place, compared with 65 per cent of professional workers in the same age group, the picture becomes very stark.”

She told Newstalk Radio on Monday that there was an “extraordinary divergence” between the two groups.

“That is why we felt it was important to publish it.”

Dr Casey, who is a patron of the Iona Institute, said the relationship between age and marital breakdown had not been examined for the research and added that it was “certainly possible” that it was a factor with those in the lower socio-economic group marrying younger.

She said more research was needed to identify what factors were putting a strain on relationships.

“There is no doubt that the financial well-being of a couple is very important in cementing a marriage, particularly as children are growing up and requiring money for secondary school and going on to university – it does make a huge difference.”

“Amazingly, among the Indian population of Ireland just 1.9 per cent were separated or divorced whereas among Latvians and Lithuanians it was way above 20 per cent. In fact, it was 28 per cent for Latvians – so there are huge cultural factors as well, and the approval and disapproval within those cultures of divorce and separation.”

In the context of the upcoming referendum to change the country’s laws on divorce, Dr Casey said the research should be “a springboard for a discussion on this important topic”.

“I think we should start discussing this and examining the issues and start considering ways of responding to this, rather than accepting as a fait accompli that we are going to have increasing divorce rates, particularly if the time period is shortened.”