New priests for Dublin and Clogher 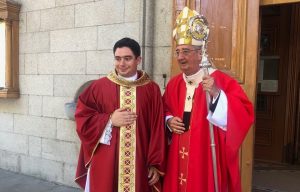 “Society needs to hear the message of Jesus proclaimed authentically and lived authentically,” Archbishop Diarmuid Martin told those assembled for the ordination of Fr Robert Smyth in the Pro Cathedral in Dublin on Friday.

Describing priesthood as a unique ministry, the Archbishop said it must be exercised as a service within God’s people and within the shared faith and love that is present in God’s people.

Referring to the Church as marked by imperfection and made up of sinful men and women, he told the congregation, “The history of the Church is marked by corruption, sinfulness, abuse, and disregard for men and women and even for the poor who are a special sign of the presence of Jesus among us. How many of our contemporaries repeatedly say that they believe in Jesus but they cannot believe in the Church?”

Archbishop Martin was presiding at the ordination of thirty-three-year-old Fr Robert Smyth from Knocklyon Parish in Dublin.

He attended Coláiste Éanna in Rathfarnham, and then studied Management Science and Information Systems at Trinity College where he graduated with First Class Honours.

He worked for six years as a Management Consultant at Accenture in both Ireland and the UK, specialising in IT Strategy. But as his career progressed, he felt increasingly called to serve God as a priest.

After several years of discernment, he began his priestly formation at St Patrick’s College Maynooth where he completed a Higher Diploma in Philosophy at NUIM.

After completing his studies in philosophy, he was transferred to the Pontifical Irish College in Rome where he completed a Baccalaureate in Sacred Theology at the Pontifical Gregorian University. He is currently engaged in further studies in Rome.

In the course of his training, Fr Robert completed pastoral placements in a nursing home in Meath, a HSE facility for mental healthcare in Kildare, the chaplaincy at Mountjoy Prison, the chaplaincy at Dublin Airport, homeless services run by Crosscare in Dublin and by the Community of Sant’Egidio in Rome as well as the parishes of Wicklow, Rathnew, River Valley (Swords) and Drimnagh.

He was ordained a deacon by Archbishop Martin in Rome in April last year.

In his homily at Friday’s ordination service, Archbishop Martin said the Church of Jesus Christ is a Church of communion.

While the early Church was marked by gathering and sharing, one of the characteristics of the Church of the future in Dublin will be that of different ministries working together for the mission of the Church in a changed culture, he said.

Describing priesthood as a ministry of and within the Church, Dr Martin said he was always struck in the rite of ordination that when the question about the worthiness of the candidate is asked that the answer in the first place is “after enquiry among the people of Christ” and only then “upon recommendation of those concerned with his training”.

“The priest who is called to offer sacrifice in the Mass must be the one whose life is marked by sacrifice. The way your life witnesses authentically to Jesus will obviously affect the effectiveness of our ministry. Yet the effectiveness of your ministry does not depend just on your efforts, but on how you allow yourself to be an instrument of the life-giving power of Jesus Christ.”

He said, “The priest is one who is chosen and is anointed with a special mission. This does not mean however that the priest is set apart in a position of superiority within the Church. The priest teaches God’s people but he must also learn from the faith of the Church as lived out especially by the poor and the marginalised and those who witness to Jesus on the peripheries of the world of influence and power.”

The priest must strive to know Jesus not in order to feel that he can know Jesus better than others can but to realise above all that his ministry as a priest depends on the loving care of Jesus. 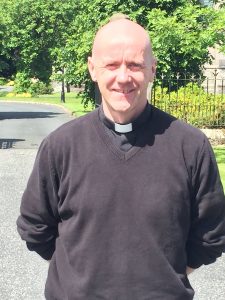 Later today, Rev Seán Mulligan will be ordained to the priesthood for the Diocese of Clogher by Bishop Noel Treanor of Down and Connor at St Macartan’s Cathedral, Monaghan.

Having completed his studies at the Pontifical Irish College in Rome, Rev Mulligan has been ministering as a deacon in the diocese for the past year, initially in Carrickmacross and, more recently, in Enniskillen.

The 47-year-old is a native of Knockatallon in the Parish of Tydavnet.

Deacon Seán Mulligan is the son of the late Michael and Philomena Mulligan. One of three brothers, he was educated in St Joseph’s NS, Knockatallon, and Beech Hill College, Monaghan.

Later, he obtained a National Diploma in Civil Engineering from Dundalk Institute of Technology (DKIT).

After working for three years in the concrete business, Seán took up a post with Monaghan GAA, coaching primary school children in the north-Monaghan area in Gaelic Football and Hurling.

It was during this period that he felt a renewed inner-desire to serve God through the priesthood, but he chose instead to pursue a career in Intellectual Disability Nursing through DKIT and St Mary’s Residential Centre, Drumcar, Co Louth.

He spent five years working as a staff nurse in St Mary’s before finally answering the call to priesthood, entering formal studies for the Diocese of Clogher in 2007.

Deacon Seán spent the first year of his formation in a propaedeutic year at the Royal English College in Valladolid in Spain, before studying philosophy for two years in St Patrick’s College, Maynooth.

After this, he spent a period of time discerning community life with two different religious communities, before returning to the diocese.

He then underwent a pastoral year in Dublin, working alongside Fr Peter McVerry, SJ, where he gained a great deal of experience in working with the homeless, individuals with drug and alcohol addictions, and with prisoners.

Following this, he moved to the Pontifical Irish College in Rome to study for a degree in theology at the Angelicum University. He was ordained to the diaconate in Rome last year,

An avid sports fan, he is a devoted follower of his home club, Scotstown GFC, and the Monaghan county teams.

He represented his club, Scotstown, at all levels, winning two Monaghan Senior Football Championships with them in 1992 and 1993.

He has also represented Monaghan county at Vocational Schools’, Minor, U21, and senior level. He is a lifelong member of the Pioneer Total Abstinence Association.