Home > Featured > New priest ordained for Diocese of Down and Connor

New priest ordained for Diocese of Down and Connor 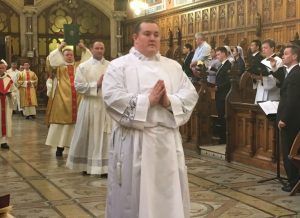 The Diocese of Down and Connor rejoiced on Sunday as Bishop Noel Treanor ordained Fr Tony McAleese at the Church of St Vincent de Paul in Belfast.

The 34-year-old is a former catering manager and the first priest originally from St Vincent de Paul’s to be ordained in the parish in 50 years.

He worked in catering from 2000 until 2012 when he commenced his seminary formation in St Malachy’s, Belfast and did his philosophical studies through Queen’s University, which he completed in 2014. He later completed his studies in Maynooth.

Rev Donnelly is the first permanent deacon in the Diocese of Clogher.

In his homily at the Church of Saint Vincent de Paul, Ligoniel, Belfast, Bishop Treanor told the congregation that Fr McAleese was ordained a priestly minister of the “living word of God, of the new life, of the order of new hope, offered to humanity in Christ.”

He told the new priest that the future understanding of the Christian community and of the Church would give greater emphasis to building communities of conscious faith, to mission and new forms of catechesis.

“Thirty-two years hence, in the summer of 2050, you will have reached your early 60s. Much will have changed in the world within those coming decades and the face of the life of the Church may well have undergone further change.”

“In the years of your future ministry with the faithful, religious, priests, permanent deacons and bishops of this diocese, you will be called to work untiringly, imaginatively and creatively to sustain our parishes and Pastoral Communities as communities where the love of God is experienced, kindled, kept alive and responsive to the needs of the time within the local Christian communities, in our society and world-wide.”

“With parishioners and clergy you may see the emergence of new models of ministry and pastoral care; indeed your service of Christ will call you, as it calls us as a local Church in these present times, to devise and accept new pastoral arrangements so that the spiritual good of all may be fostered and cared for.”

“It is probable that in a more secular and pluralist society we, Catholics and Christians, will realise more clearly that the Christian way of life is a freely chosen discipleship of Christ in ever renewed conversion to the living Word of God.”

Fr Tony McAleese was born on 4 June 1984. He is the youngest son of Edward and Anne McAleese. He has four older brothers.

He has been involved in hospital and parish ministry at St Agnes’ Parish, Belfast, St Vincent de Paul, Ligoniel, and the parish of Downpatrick.