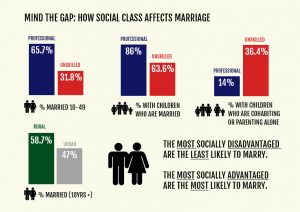 A new report from the Iona Institute shows that upper professional workers are more than twice as likely as unskilled workers to be married.

The huge discrepancy is revealed in the report ‘Mind the Gap’ which shows that there are formidable social impediments to marrying if you from a socially disadvantaged group.

The Iona Institute is calling for these impediments to be fully explored and, where possible, removed.

The report also shows that with one exception (plant and machine operatives (‘Social Class H’), the likelihood of being married declines as we move down the social classes.

A divide also exists between rural and urban areas.

Looking at Census 2011 data, it finds that 58.7% of adults aged 18 and over who live in rural areas were married, compared with 47% who live in urban areas.

Commenting on the figures, Psychiatrist Professor Patricia Casey said, “Anyone who believes in the importance of marriage should be deeply concerned about these figures.”

“Social disadvantage clearly diminishes a person’s chances of marrying and not marrying in turn increases the odds of remaining socially disadvantaged. It is a vicious circle and it is one that obviously affects children as well.”

“A US study by one of that country’s most esteemed social scientists, Isabel Sawhill, finds that if Americans married at the same rate today as in 1970, rates of poverty in that country would diminish by between 20% and 30%.”

Professor Casey continued, “One factor almost certainly driving down the odds of marrying for those who are most socially disadvantaged are poorly paid, insecure jobs. People are less likely to marry if they feel financially insecure.”

“There are also disincentives to marry built into the social welfare system. It can be more financially advantageous for two people on social welfare to remain single than to marry.”

“Last year we had a big debate about the nature of marriage. Whatever our disagreements about that, those on both sides of that debate ought to be able to agree that the big marriage divide which exists between the social classes ought to be a matter of grave concern, and a matter of concern for our politicians and other policy-makers especially.”

“It should be a matter of consistent public debate, as it is for some other issues, such as the gender pay gap”.

The foreword to the report is written by David Blankenhorn of the Institute for American Values. He was a leading opponent of gay marriage in the US who then became a campaigner for it.

In the foreword, he draws attention to the widening marriage gap that also exists in the US, and says that all who are concerned about the future of marriage must “come together to overcome the…class divide in marriage”.

The report focuses on the age group 18-49 because this is the age group in which people start their families, but the divide persists in the older age groups as well.

Using Census 2011 data, we find that 55.9pc of all adults in the ABC1 social classes were married vs 35.7pc in the two most socially disadvantaged social classes.