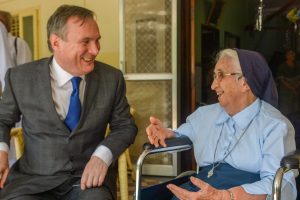 A new documentary by Irish filmmaker Myles O’Reilly, which is currently being screened at a number of film festivals in Ireland and in India, tells the story of a 91-year-old Irish missionary sister who has spent 70 years teaching in India.

‘Sister India’ recounts the story of Presentation nun, Sr Loreto (Peg) Houlihan who was born near Carrick-on-Suir in Co Tipperary in 1927.

The documentary has already been screened at the Dingle International Film Festival and the Silk Road Film Festival.

Film-maker Myles O’Reilly has said that he is not very religious but when he saw Sr Loreto’s deep love of India and its people, he found it heart-warming.

“Sitting in front of her and listening to her talk was like being warmed by the hearth of an Irish fireplace on a rainy day hearing stories as she it from ‘the long ago’. I learned from her that India and its culture retains more of the life she left 70 years ago in Ireland than the country of her birth today, and so she chooses to live the rest of her days in India for that natural familiarity” he explained.

Born into a large family in 1927, Peg Houlihan grew up in hard times, especially in the 1930s with a worldwide depression and an economic war between Ireland and Britain.

By the time she was five years old, her mother was already a widow as her father had died.

In 1943, 16-year-old Peg left rural Tinhalla near Carrick-on-Suir in Co Tipperary and joined the Presentation Sisters in Britain.

She was missioned to India and set sail from Liverpool to Bombay as the Second World War was drawing to a close; she celebrated her 17th birthday on board. 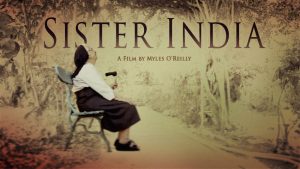 After landing in Bombay, she made the rest of the journey by train down to Madras.

On arrival at the Presentation Convent, there was a letter waiting from her mother.

It opened with “Céad míle fáilte” to India.

In the documentary, Sr Loreto speaks lovingly of that letter, as she knew it was a huge sacrifice for her mother to let her go. They never saw each other again.

Sr Loreto dedicated her life to love and serve others through education in Chennai. After completing her teacher training at Church Park College in Madras, she went on to work as a primary school teacher spending most of her life at St Joseph’s Anglo-Indian School in Perambur in north Chennai.

The children in her class were six years old and over the years, she has taught three generations of families, and become a well-loved and respected person in the community. In class she says she was strict, but outside of school, “I didn’t have enough fingers for them to hold onto.”

After Indian independence in 1947, the Indian government asked the Presentation Sisters to continue their education, and the doors were opened to the indigenous population, which in India is almost 80 per cent Hindi.

The children were encouraged to celebrate their culture in the schools.

Today, Sr Loreto says she is “blessed with strong faith, good sleep, and no regrets”, and intends to live out her life in her beloved India.

Venerable Nano Nagle – founder of the Presentation Congregation – has been her role model in life. Nano is known as “The Lady of the Lamp” – a pioneer of Catholic education in Ireland during penal times.

The idea for the film ‘Sister India’ was sparked by Irish woman, Áine Edwards, who has been living in India since 2003 where she runs a business consultancy service.

“My many conversations with Sr Loreto evoked a passion in me to produce a documentary on her. I wanted to not only share her story, but also to celebrate the work of so many other Irish educators in India, as this era draws to a close and another starts.”

According to Áine Edwards, “The Irish legacy of education in India is one of Ireland’s strongest links with the country. The seeds have been sown for the Indian sisters to take this legacy forward for the next generation of children. ‘Sister India’ was made to preserve not only the story of Sr Loreto, but to remember all the Irish who have dedicated their lives in the service of education and community support in India.”

“The adults I meet nowadays who attended schools where Irish brothers and sisters were teachers, talk fondly of them and their education. The late chief minister of Tamil, Nadu Jayalalitha, has spoken of her school days at Church Park as being the happiest of her life.”

The first Presentation mission in India began in 1842 when four pioneering sisters from Ireland arrived in Madras (Chennai).

The mission spread to many other states in the Indian sub-continent including Rawalpindi which later became part of Pakistan.

Sisters from India went on to establish mission foundations Matlock in England, in Zimbabwe, and in Zambia.

More recently sisters from India are also ministering in Thailand, Slovakia, Ireland, and the Holy Land.

There are currently 165 sisters living and ministering in a number of states including Tamil Nadu, Goa, Kerala, Andhra Pradesh and Maharashtra.

They are involved in formal and informal education, social work, health and pastoral care, as well as justice, peace, and advocacy on behalf of those on the margins, especially women and children.