New documentary film on the life of St Patrick 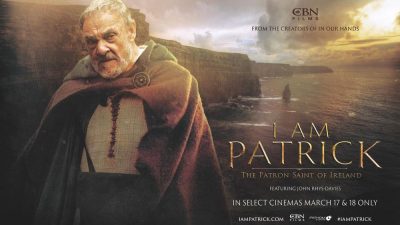 A new feature-length docudrama about Ireland’s patron saint is set to hit Netflix in Ireland and the UK from Thursday, 12 March.

‘I am Patrick’ was filmed on location in Ireland and Britain last year.

It uses historical re-enactments, expert interviews, and St Patrick’s own writings to trace the journey of the 5th century missionary who brought Christianity to Ireland.

Produced by CBN Documentaries and directed by Jarrod Anderson, ‘I Am Patrick’ tells the story of the Welsh teenager who was kidnapped and became a slave in Ireland but later escaped back to Britain. There he felt called by God to return to Ireland to spread the Gospel.

The film features ‘Lord of the Rings’ star John Rhys Davies, who was Gimli in the film adaptation of JRR Tolkein’s epic tale, as well as Sean T. O’Meallaigh from the popular TV series ‘Vikings’. Rhys Davies portrays the older Patrick, while O’Meallaigh depicts a younger Patrick and Robert McCormack plays Patrick as a teenager.

Written and directed by Jarrod Anderson, ‘I am Patrick’ is co-produced by Anderson and Sarah Maunsell. The Executive Producer is Gordon Robertson.

Speaking about the film, Jarrod Anderson explained, “Most people know about the green beer, banishing the snakes, and the parades but few actually know about the man behind the myth. From a life of comfort to enslavement to a faith that changed a nation, this is the true story of the Saint you thought you knew.”

The film opens with Patrick’s own written testimony from his Confession: “I am Patrick. I am a sinner; the most unsophisticated of people, the least among all the Christians and among some the most contemptable.”

Patrick wrote his Confession so that others would “understand that to which I have committed my soul.”

The story of the Saint’s life is set against the collapse of the Roman Empire in the 5th Century AD. As barbarians ravaged Europe, the teenager was living a simple life as the son of a British political figure. However, at the age of 16, Patrick’s life was turned upside down when he was kidnapped by pirates and enslaved in Ireland.

He spent six years working as a shepherd there and was driven to the brink of starvation. Patrick turned to his Christian faith for consolation.

After he managed to escape his enslavement and return home to Wales, he had a dream in which God told him to go back to Ireland and bring Christianity to its people.

Against the wishes of his family, Patrick returned to Ireland and began to convert people to Christianity. He also opposed those who operated as slavers, as well as local Irish kings and druids.

In an endorsement of the film, Bishop Thomas J. Tobin of Providence described St Patrick as “a good, courageous, and holy man whose entire life was informed by his encounter with God and his belief in the Gospel. His impact on the Christian Church and the whole Western World is enormous. That’s why his memory, celebrated on March 17th, deserves to be marked with much more meaning than can be offered by civic parades, green beer and shamrocks. Clearly, the movie ‘I Am Patrick’ points us in the right direction.”

Executive producer Gordon Robertson, who is also CEO of the Christian Broadcasting Network (CBN), and president of Operation Blessing, CBN’s humanitarian organisation, spoke about the film in an interview with Catholic World Report.

He told CWR, “Patrick has long been a hero of mine. Twenty-five years ago, a friend gave me a copy of his Confessio, or Confession, in which he writes about his life. I was a missionary in India, and his Confession spoke to me. He was preaching in an environment where people didn’t know God, and didn’t know Scripture. I began using his famous prayer (‘Christ with me, Christ before me, Christ behind me, Christ in me, Christ beneath me, Christ above me…’) before I preached.”

Asked if the film was a call to re-evangelise Ireland, where the practice of the faith has declined, Gordon Robertson responded, “It’s a call to re-evangelise the whole world. I hope it will prompt more people to devote their lives to missionary work. It could be in England, Ireland, the United States or any other part of the world. There are many un-reached groups out there, as well as plenty who have abandoned the faith and need to be called to return.”

He added, “The need is great, but what are lacking are people willing to take up the task. As it says in Matthew 9:38, ‘Pray ye therefore the Lord of the harvest, that he will send forth laborers into his harvest.’ That is what Patrick did. And, in the 5th century, Ireland was one of the remotest parts of the world. Patrick went there to make Christ known.”