Home > Featured > New director of vocations for Cork and Ross 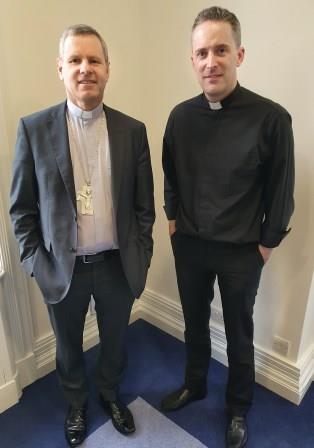 Bishop Fintan Gavin has appointed Fr Cian O’Sullivan, CC, Ballincollig, as the new director of vocations in the Diocese of Cork and Ross. Fr O’Sullivan will work with an interdisciplinary team in this new role.

Bishop Gavin has expressed the hope that this appointment will bring new focus and energy to a vital area of diocesan life.

During the ceremony for his ordination in June 2019, Bishop Gavin highlighted the need for vocations to the priesthood, saying: “We need to promote a culture of vocational discernment and consideration of all of the Christian vocations to love and service.”

He said that the Diocese of Cork and Ross had dedicated, hardworking and faithful priests giving generous service, but that they were part of a group that was getting smaller.

“We need to actively go out of our way to encourage, foster, nourish and promote vocations to the priesthood and consecrated life,” said Bishop Gavin.

The priesthood is a challenging but fulfilling life, he said, but urged people of the diocese to “help young men, all those who feel that Jesus may be calling them to follow him as priests, to hear and respond to God’s call to priesthood. Priests come from our families and as families we must nurture and support those vocations.”

At the time of his ordination, there were 109 priests in the 68 parishes of Cork and Ross.

Nationally, numbers of vocations to the priesthood have been down in recent years. Fifteen seminarians began their formation and academic programme for 2019-2020 at St Patrick’s College, Maynooth and the Pontifical Beda College, Rome, with a number beginning their propaedeutic programme in other locations in Ireland and abroad. That year there were a total of 68 studying for the priesthood for Irish dioceses.

Eight students started studies for the priesthood in Maynooth during 2018 and two of them were from the neighbouring diocese of Cloyne which includes part of Cork.

In 2017, six men began training for the Catholic priesthood at St Patrick’s College and one of them was from the Cork and Ross Diocese. In 2016, some 14 men began as seminarians in Maynooth.