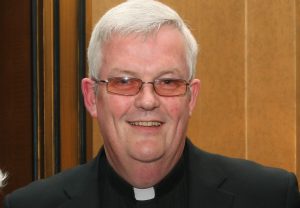 A Galway priest has been elected as the new administrator of the diocese.

Canon Michael McLoughlin, the parish priest of Moycullen, will oversee the diocese of Galway, Kilmacduagh and Kilfenora, until a successor is appointed to Bishop Martin Drennan.

Bishop Drennan announced his retirement on Friday on medical grounds. It may take up to a year before a new bishop is appointed.

Canon McLoughlin, who is originally from Dr Mannix Road in Galway and who studied for the priesthood at St Patrick’s College in Thurles, Co Tipperary, was elected diocesan administrator at a meeting of the Diocesan College of Consulters (which comprises the 12 canons of the diocese) of the Diocese of Galway, Kilmacduagh and Kilfenora, last week and he took up his position immediately.

A diocesan administrator is elected to oversee a diocese when a bishop dies, retires, or resigns, pending the appointment by the Holy Father, Pope Francis, of a new bishop for the diocese.

While he has many of the responsibilities of a bishop, he does not have the authority to make significant changes or innovations.

After his election Canon McGloughlin expressed his gratitude to Bishop Martin Drennan.

He acknowledged his “dedicated ministry” to the diocese over the past 11 years and said he was held in “high affection” by both priests and the public.

He added that Dr Drennan could rely on their prayerful support in the years ahead.

Bishop Drennan stepped down from his position on Friday 29 July with immediate effect.

In a statement he said he had given the matter careful thought and had sought and taken advice on the issue.

“I have decided, for medical reasons, to ask the Holy Father to allow me retire from the office of Bishop of Galway and Kilmacduagh and the office of Apostolic Administrator of Kilfenora. Pope Francis has most kindly granted this request.”