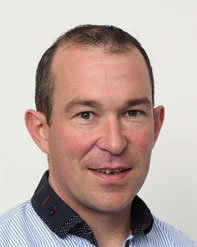 Coláiste Chiaráin, a new voluntary secondary school in Athlone, was officially opened this week by its patron, Bishop Kevin Doran of Elphin, and the Minister for Communications, Climate Action and Environment, local TD Denis Naughten.

The new co-educational college springs from an amalgamation of St Aloysius’ and St Joseph’s, two colleges that have served the west Athlone and south Roscommon region for some 70 years.  Coláiste Chiaráin has been ‘unofficially’ open since the start of this academic year, and it has more than 530 students enrolled, including nearly 100 first years.

“It is hard to believe that two short years ago, on a wet winter evening, we gathered not far from here to discuss with the local community the plan for the development of Coláiste Chiaráin,” said Bishop Doran in his address.  “The fact that the project has progressed in such a seamless and timely way is due to the generous engagement of all the stakeholders, staff and students of the two parent schools, board members and the wider local community.  A special word of thanks to the officials of the Department of Education and Skills who have worked so closely with us in making Coláiste Chiaráin a reality.”

“Coláiste Chiaráin is a response to an ‘urgent need’ in the west Athlone region for post-primary education, given the number of primary school pupils that are in the area,” said the bishop who noted that this wasn’t the first ribbon that he and Minster Naughten had cut together. He added that the college was ‘a symbol of the reality that Church and State work in the same space and serve the same people’.

The college is named after St Ciarán of Clonmacnoise, one of the 12 apostles of Ireland, who was born in the early 6th century, the son of a carpenter, and who can be seen as a very apt patron of learning. According to legend, one of his cows provided the parchment for Leabhar na hUidire, The Book of the Dun Cow, the oldest existing Irish language manuscript, which is now in the possession of the Royal Irish Academy.

St Ciarán can be seen as a support and an inspiration to those who have difficulty with their studies. As a student monk he was tasked with learning the Gospel of St Matthew, but when he was quizzed by St Fionán of Clonard he only had learnt half of what was needed. The other students jeered and called him ‘Ciarán half-Matthew’, but Fionán silenced them, saying, “He isn’t ‘Ciarán half-Matthew’, he is ‘Ciarán half-Ireland’, for one day he will have half the country and the rest of us will have the other half.”

According to the school principal, Brendan Waldron, “This is one of the widest range of subjects of any school, one of the tangible benefits of a large co-educational school.”