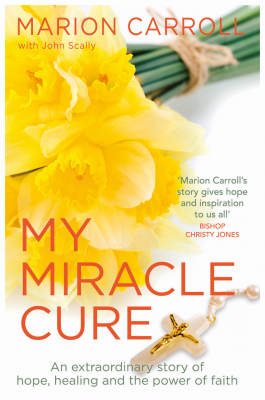 In her new book My Miracle Cure Marion Carroll, who was miraculously cured from multiple sclerosis in Knock in 1989, shares her story for the first time.

The book is co-authored with well-known writer and sports journalist, Dr John Scally.

It recounts how the Athlone woman’s life was changed forever after she was cured at the Co Mayo shrine.

According to the publishers, Black and White Publications, this is a story of hope and triumph of the human spirit – an ordinary woman with an extraordinary story.

With humour and grace, Marion Carroll tells the incredible, moving story of her life.

In 1989, after seventeen years of debilitating illness, the mother of two was at death’s door.

A wheelchair user, she was incontinent, blind in one eye and partially sighted in the other. She suffered from low self-esteem, with severely affected speech caused by a long-standing, debilitating illness diagnosed as MS.

That September, against medical advice, Marion went to the Anointing of the Sick in the Basilica in Knock on a stretcher. During the Mass, Marion describes a ‘whispery breeze’ pass over her. Once Mass was over, she stepped free of pain from her stretcher. To the astonishment of everyone present, she got up and walked.

To this day, conventional medical wisdom is unable to account for this life-changing moment. For three decades the Church investigated her recovery and finally, 30 years to the day of her cure, Marion was back in Knock as the Catholic Church recognised that hers was indeed a miracle cure – the first ever miracle recorded at the religious site.

Monsignor Joseph Quinn described Marion as “a chosen instrument of God and Our Lady to communicate at home and abroad.”

Now she has five grandchildren of her own.

She told CatholicIreland.net, “When we got to Knock they brought me into the nurse and she settled all the things you do with an invalid. I was too sick to be brought to the Basilica immediately, so I was taken to the rest and care centre. Eventually, just before Mass, we went over to the Basilica and they put me under the statue of Our Lady of Knock and when I looked up at the statue, that’s the statue they carry in the procession, I thought she was the most beautiful and friendliest statue I had ever seen in my life.”

“I wanted another housewife, another woman to talk to me who would understand what was within me and I looked back up at the statue of our Lady and I said to her, ‘You are a mother too, you know how I feel about leaving my husband and children.’”

“It wasn’t a prayer, it wasn’t a statement, it was just one woman chatting to another. I then prayed to her to look after my husband and children and to give them the grace to accept my death as the will of God.”

During the Blessing of the Sick, Marion experienced a new sensation.

“My friend Nuala came over to talk to me and I couldn’t control myself and I said to her, ‘Would you think I was stupid if I said to you that if the stretcher was opened that I could get up and walk?’ and she said ‘No,’ but I knew the poor woman didn’t know what to say. So she called a nurse who opened the stretcher and my two legs swung out and I stood up straight. It was the first time in three years I had been able to do so.”

“I wasn’t a bit stiff even after all those years, also I was strapped into the stretcher since a quarter to nine that morning and this was 4.30pm and you know even because of that I would have expected to be stiff. I got a lovely warm feeling and it has stayed with me constantly. I am absolutely convinced it was a miracle. My speech was perfect and my hands and arms were perfect. I was standing unaided on my own two feet.”

In September 2019, thirty years after that experience the Catholic Church officially recognised her cure.

Over 30 years on she continues to enjoy good health. One of her most powerful memories was meeting her husband Jimmy the evening of her cure.

“I sat up straight the whole way home in the ambulance. I wouldn’t even lean back. I was walking down the steps of the ambulance and Jimmy was bringing the wheelchair around and he said: ‘Well how was Knock?’ I said: ‘Ah it was all right Jim, sure why would anybody bother going down there.’ He hadn’t realised that I was walking. I went over and put my arms around him and I never saw a man crying like that. He just got down on his knees and started thanking the Lord.”

My Miracle Cure is published by Black and White Publications and is available in all good bookshops now.