New book tells the story of Ireland’s connections with Lourdes 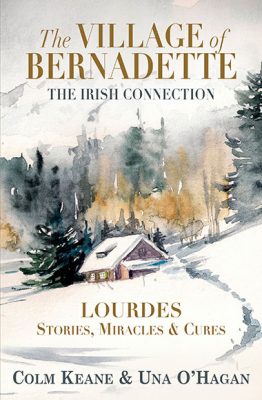 A new book about Ireland’s links with Lourdes, the world’s most famous Marian shrine, is due to be published next week by husband and wife team Colm Keane and Una O’Hagan.

The Village of Bernadette: The Irish Connection (Lourdes – Stories, Miracles and Cures) describes many of the miracles and cures experienced by Irish people at the shrine in the south of France.

The shrine is located at the place Our Lady appeared to St Bernadette on 18 occasions in 1858.

These miracles include remissions from cancer and recoveries from epilepsy, lung problems, skin disease, pain and paralysis. Many spiritual miracles also occurred at the shrine, where people found their faith totally renewed by their experiences there.

Among the tens of thousands of Irish who visited the shrine are President John F Kennedy, Grace Kelly, Brendan Behan and Seamus Heaney.

A taster of the book can be read on the website of the Society of St Vincent de Paul in Ireland, where an extract detailing the circumstances of the 1939 Ozanam Pilgrimage is published.

There were 400 on that pilgrimage from Ireland, including 66 invalids, one of whom was an eight-month-old girl.

Little did the pilgrims know when they set off from Dublin on 21st August 1939 that once they arrived in Lourdes they would be in danger of being trapped in France. On 1st September Hitler’s Germany invaded Poland, and Europe prepared itself for war.

According to Keane and O’Hagan, as various states closed their borders and introduced travel restrictions, there were fears that the Irish would be pinned down. They were advised  to “get out of Lourdes fast”.

They made a 22-hour non-stop train journey to Calais, where they had to wait for several hours before being allowed aboard a cross-channel ferry to Dover, where a special train awaited them to take them to Holyhead and another ferry to take them home to Ireland.

A special emergency broadcast was made by Radio Éireann to ensure that relatives of the pilgrims would be waiting for them in Dún Laoghaire when they arrived home sooner than expected.

No Irish pilgrimages to Lourdes took place again until 1947. In the wake of World War II, conditions for pilgrims were grim. They were asked to bring extra food, and the French authorities requested that only invalids who could travel sitting up made the pilgrimage.

On that first post-war pilgrimage, 116 people travelled to Lourdes, where they joined some 150,000 people from all parts of the world. On that pilgrimage, the Irish were the only contingent to display a national flag.

The Village of Bernadette is published by Keane and O’Hagan’s own company, Capel Island Press. The Kindle edition, priced at UK£5.99, can be pre-ordered from Amazon for automatic delivery to your electronic reading device on Sunday September 22.

If you would like to read the extract relating to the 1939 Ozanam pilgrimage to Lourdes in full, visit the St Vincent de Paul website.