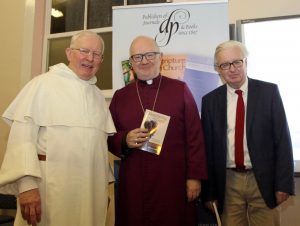 A new book of meditations on priesthood by the Church of Ireland Archbishop of Armagh was launched by the RTE radio producer and novelist, Aidan Mathews, in Dublin last week.

‘Shouldering the Lamb: Reflections on an Icon’ by Dr Richard Clarke is published by Dominican Publications.

It contains 11 meditations on the ancient figure of the shepherd carrying a lamb across his shoulders.

Archbishop Clarke views this image from a number of different angles and reflects on how any carrying of another in the loving service of God and humankind is an echo of the God who is Love.

In his address, Aidan Mathews described the book as a meditation on the privilege and precariousness of priesthood.

He said these were emphasised by the general culture which, “far from shouldering the shepherd, let alone the lamb, has been pretty well cold-shouldering pastors and all their presumptions since well before the start of the third millennium”. 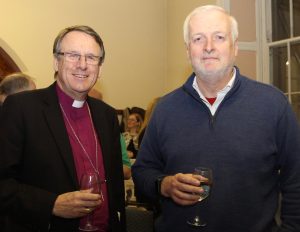 Elsewhere he said Bishop Clarke “presents a mighty procession of magnificent pastors, chief among them the timely R.S. Thomas and the timeless George Herbert, the two foremost Anglican Catholic poet-priests in our language, the former rector a reminder to us all that some forms of temperamental affliction can be fertile varieties of good grief, and should not be pathologised because of a clinical deficit in the man’s dopamine levels, and the latter reverend a reminder that some forms of contemplative vision are not invalidated by a probable surfeit of serotonin in the frontal cortex of his seventeenth century brain.” 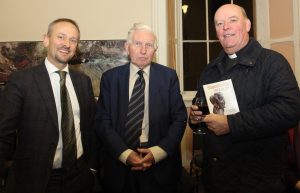 Archbishop Clarke explained that the origins of the book lay in a visit to a primary school when a child asked him how much his cross cost.

The cross, which depicted the shepherd Christ with the lamb over his shoulder’, was made of pewter and he had told the child that it was fairly cheap.

“Afterwards I asked myself why I had said any cross is cheap… the symbol on the cross became more and more entrancing and enticing,” he recalled and later, when the Bishop of Connor asked him to lead a retreat for his younger clergy, he took it as his theme.

“It is not intended as a primer for clergy. It is intended to express that all of us in our own way are called to shoulder – shoulder others and the needs of others and at times to be shouldered,” Archbishop Clarke said.

Publisher, Fr Bernard Tracey OP, said part of the mission of the Irish Dominican Province was to facilitate the search for the eternal truth.

“We have a sense of calling to illuminate rather than to shine… It is great to have people of different traditions to join us in our exploration,” he said. 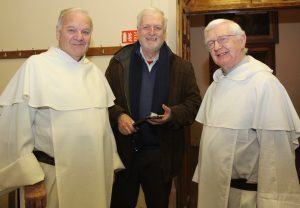 He added that Archbishop Clarke saw poetry of a sensitive means of accessing the divine.

‘Shouldering the Lamb’ is published by Dominican Publications and costs €12. It is available here: https://www.dominicanpublications.com/component/hikashop/product/113-shouldering-the-lamb