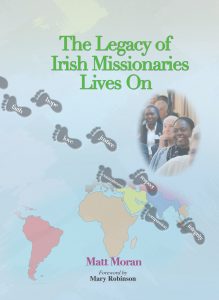 The former president of Ireland and UN Secretary General’s Special Envoy on El Niño and Climate has said she is pleased to see the “increasingly important role being played by faith-based organisations at the United Nations”.

In her Foreword to a new book, ‘The Legacy of Irish Missionaries Lives On’, Mary Robinson says religious leaders are now more at the heart of global decision-making where, through their extensive networks in the developing world, they advocate about living conditions there, abuses in civil rights and social justice, and climate change.

Elsewhere in her contribution to the new book, Mary Robinson suggests that “Missionaries are an important part of our diaspora.”

She said that “Their committed work, as illustrated dispassionately in the book and supported with diverse testimonial evidence, has helped to establish a recognition of Irish values internationally. The missionary movement is firmly enshrined as a key part of our national heritage.”

She describes the book as commending the past and pointing to the future, where the work of the Irish will be continued in a new era by local and indigenous missionaries and by Irish lay missionary volunteers.

Mrs Robinson praises the book for providing new insights into the role played by missionaries in the setting up of APSO in the early 1970s, which led on quickly to the establishment of Ireland’s overseas aid programme in 1974.

Of the author, Matt Moran, she says he has taken great care in presenting a deep understanding of the intrinsic values that faith brings to development and humanitarian aid. She also says that missionaries “have long … been advocates for protection of nature and the environment as God’s creation”.

Matt Moran is a former chairman of Misean Cara and he headed up fundraising and development for the Missionaries of the Sacred Heart for ten years. His book is launched this evening by Senator Rónán Mullen at St Paul’s Church on Arran Quay.

It reflects on the great humanitarian and development work of missionaries and provides some case histories.

It differs from other books about missionaries by illustrating how the missionary era has changed.

It tells how local and indigenous missionaries are now carrying forward the legacy of the Irish missionaries with the same passion and commitment in poor and deprived communities, and during natural disasters or emergencies where they are first responders. 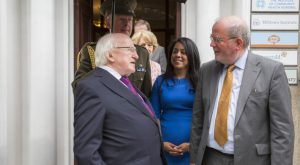 Most of these local missionaries are members of congregations with bases in Ireland, but many are also diocesan congregations founded by the Irish and are a key part of the Irish legacy.

In her Foreword, Mary Robinson writes, “Told by a lay insider the story is easy to read. Matt Moran has an in-depth knowledge of the missionary movement.”

Using his knowledge of missionaries, she says “he has thoughtfully brought together in this book the views of academics, leaders of church and state, development specialists, media personnel, historians, and diplomats as well as missionaries and the people they support in the developing world.”

“Their shared experiences provide a wealth of knowledge and insight into the truly remarkable contribution and impact that our missionaries have made, and are continuing to make alongside their successors and partners in the developing world.”

She also highlights how the shift in Christianity from the north to the south is impacting on the number and visibility of missionaries in Ireland, and thus the traditional connection between Ireland and developing countries is declining.

“Using his experience in town twinning and supporting it with interesting case histories, Matt Moran demonstrates how parish twinning is an innovative model of partnership in international relations and a bridge that can connect communities in Ireland and the global south.”

Mrs Robinson says that many missionaries are passionate leaders in tackling issues of gender equality and improving the welfare of women in developing countries.

“Both directly and through their networks they focus on education for the girl child, female genital mutilation, pregnancy and child-birth services, early marriage of girls, the vulnerability of women and girls especially in human trafficking, and psycho-social supports during crises such as Ebola and HIV.”

The book contains a series of articles and reflections from across four continents by missionaries, leaders of church and state, diplomats, documentary-makers, journalists, development consultants, and academics, as well as some beneficiaries of the work of missionaries, including a tribal chief in Nigeria.

The numbers of Irish missionaries now serving in developing countries has declined to 1,100 and there are few new entrants to missionary congregations in Ireland.

Unlike earlier books which give a historical account, this book illustrates how the work initiated by the Irish is being continued by indigenous members of their congregations in the global south where vocations are plentiful, and by diocesan congregations that some Irish missionaries founded, particularly in Africa and in India.

Missionaries receive significant Irish Aid funding through Misean Cara, and the book advances a strong case for the continuation of that funding to local and indigenous missionaries whose development and humanitarian work amongst the poor is an integral part of Ireland’s overseas aid programme.

Speaking to CatholicIreland.net, Matt Moran said he believed the most significant contribution that the book makes to discussion about the Irish missionary movement is that it illustrates how the legacy of the Irish is being carried forward in the global south.

“It shows how this continuation is being achieved through the ministry of local and indigenous members of congregations with whom we have been familiar in Ireland for many decades, by local diocesan congregations whom Irish missionaries founded, particularly in several African countries and in India, and by lay missionary volunteers from Ireland who dedicate a period of their lives to mission activities and building the capacity of those local missionaries.”

He added, “Just one example in volunteering is the Columban Fathers having over 50 lay volunteers working with them overseas.”

“So, whilst the Irish missionary movement as we have known it is changing, its legacy lives on through the seeds that it sowed and are now bearing fruit in the global south. This reality is often ignored in the public commentary in Ireland about mission today.”

He also explained that the number of parish twinning partnerships is increasing between communities in Ireland and developing countries, and that this is not just in Catholic communities but also in Anglican communities.

“Our missionaries were the human bridge or connection between Ireland and developing countries but as their numbers now stand at 1,100 and are declining more and more, that link is being weakened or broken in many parishes.”

“Parish twinning is a community process involving all ages including school children and other groups. As Archbishop Michael Neary has pointed out in the case of the Westport-Aror Partnership and Bishop Michael Smith has pointed out in the case of his diocesan schools twinning programme in Meath with Myanmar and Thailand, these new forms of missionary linkage have enriched faith in these Irish communities as well as providing support to poor communities overseas.”

In 1999, the Vatican’s Congregation for the Evangelisation of Peoples recognised twinning as a valid form of direct co-operation between churches, and in 2009 the Irish Missionary Union published ‘A Guide for Parish Twinning Relationships’.

According to Matt Moran, the totality of the influence and impact of twinning partnerships includes “solidarity, global consciousness, humanitarian and development aid, culture exchange, and values in social justice … based on equality and the spirit of the gospels. They see the global church as one body – our brothers and sisters in Christ – exactly as our missionaries have seen it for centuries. Effective twinning can continue the missionary links but also create new ones in a new situation and a new future.”

‘The Legacy of Irish Missionaries Lives On’ is available in bookshops or online at www.onstream.ie. Profit from sales will go to World Missions Ireland for missionary activity in the global south.