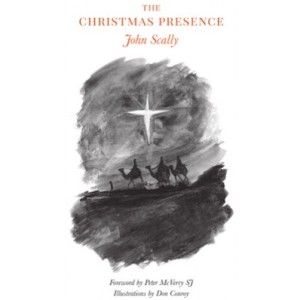 Jesuit campaigner on social justice, Fr Peter McVerry, has warned that many of the homeless on the streets of Ireland do not know where they will spend Christmas day.

The 72-year-old priest was speaking to author Dr John Scally at an event to promote sales of ‘The Christmas Presence’, a new collection of fifteen short stories which explore the real meaning of Christmas.

All royalties from the book will go to the Peter McVerry Trust.

According to Dr Scally, who penned the stories, the book was inspired by the tragic story of Jonathan Corrie who died homeless on the streets of Dublin before Christmas 2014.

He said he felt a desire to do something positive in response to this tragic death and because the sad reality is that many thousands of people in Ireland remain homeless this Christmas.

Speaking to CatholicIreland.net, Dr Scally said this shocking reality was an Irish equivalent of the original Christmas story where there was ‘no room in the inn’.

A native of Roscommon, the author of over 30 books, such as his book on rugby legend Tony Ward, is also a regular contributor to religious publications and radio. His most recent book was ‘Mother Teresa on Advent and Christmas’.

On Monday night, Fr McVerry, who wrote the Foreword to ‘The Christmas Presence’ said, “In this book we are invited to stand still for a while and ponder the true meaning of Christmas. It should be compulsory reading for everyone before we rush off to do our Christmas shopping.”

Every year priests, teachers and theologians struggle to answer this perennial question ‘What is the real meaning of Christmas?’, and these uplifting and moral stories, which are illustrated by the artist Don Conroy, may give the answer Columba Books have suggested.

John Scally told CatholicIreland.net, “I do have a problem when I hear priests giving sermons bemoaning the commercialisation of Christmas. I find that a very negative sort of way of presenting the Christmas story. It is such an important story.”

He said complaining about the commercialisation of Christmas was a missed opportunity from a pastoral point of view.

“How does that help anybody? The original Christmas story can still speak to people in a very positive way. Christianity is about good news – the Christmas story is very much about good news; so I just find it a bit depressing that people waste the opportunity to tell people a great story by going on about the commercialisation of Christmas.”

Of Fr McVerry, the writer said he admired him. “I admire people who dedicate their lives to the service of people who are on the margins of society. There has been an awful lot of moral indignation about homelessness but moral indignation hasn’t done anything to address the problem. What will address it is morality.”

“To me, Peter McVerry embodies that morality because he doesn’t just talk the talk – he walks the walk. Since 1974 he has dedicated his life to the service of the poor and lived that out every day – I do find that quite remarkable and inspiring.”

He said the collection of stories was his own small effort to do something positive by lighting a candle rather than cursing the darkness.

According to Fr McVerry, “This book helps us to escape for a while from the madness of Christmas today to bring us back to the Christmas of 2,000 years ago. Simple stories, but with a depth of meaning; short stories, which take only a few minutes to read, but a lifetime to assimilate; stories which capture the imagination of children aged 6 to 96 and open our eyes to realities beyond the tinsel and the turkey.”