New book explores role of faith in the Rising 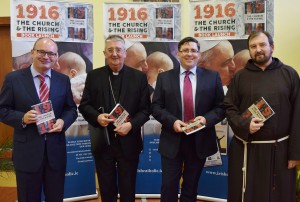 The men and women of 1916 were men and women with ideals and a deep personal spiritual inspiration, Archbishop Diarmuid Martin said on Thursday evening.

Launching a new book from the Irish Catholic newspaper titled ‘1916: The Church and the Rising’, the Archbishop said that being true to the dream of 1916 today means fostering in Ireland a new pluralism.

In this new pluralism, people of different backgrounds and faiths and political views would learn to work together for the common good.

The Archbishop, who wrote the Foreword to ‘1916: The Church and the Rising’, which was edited by journalist Greg Daly, warned that it is not enough in 2016 to commemorate and celebrate an historical event with parades, celebrations, dramas, television documentaries and books.

“We have to ask how those who fought in 1916 for Irish independence would judge us and our society today. Theirs was a dream for a very different Ireland,” he noted and how successfully their dream has been realised will be measured in terms of the kind of society we have today.

In his address at the Capuchin hall in Dublin, Archbishop Martin paid tribute to the book for “painstakingly” telling of acts of “great courage and human sensitivity by priests” recounted in the archives of the time as well as in the personal memoirs of individuals.

He underlined that the book does not fall into “any simplistic one-sided view on the role and the attitude of the leaders of the Catholic Church towards the Rising.”

‘1916: The Church and the Rising’ brings together much material about the work of the priests in Dublin during and after the Rising.

According to the Archbishop, what emerges is a unique record of personal contact and spiritual support, but also an insight into the feelings of the leaders, based on personal conversations as they faced their final moments. 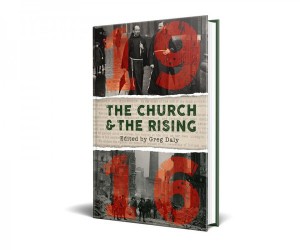 “The book recognises the faith of the leaders – but also the anti-clerical views of some of them and their feeling of abandonment by the Church of the national cause,” he said.

He cited some touching moments which reveal the surprising respect the military officers came to have for the individual leaders of the Rising during their imprisonment.

There are examples of tenderness shown by the young soldiers to whom the “terrible task” was assigned of blindfolding and executing the leaders.

“There are the final conversations: the courage in facing death, but also the questioning and doubts of some of the leaders about the loss of life that was involved.”

There are descriptions of James Connolly making his peace with God and Pearse’s happiness of receiving that news.

Elsewhere the book looks at the question of the justification of violence and the complicated task of making a judgment on events at a time when there was widespread frustration with the consistent undermining of attempts to introduce Home Rule.

He said his predecessor Archbishop William Walsh had lost all confidence in the Redmondite process – contrary to how his position was portrayed in the recent RTE television drama Rebellion.

The historical records show that many of the leaders of the Rising were in regular contact with Archbishop’s House, he explained, and that it was on a list of buildings placed under direct surveillance by the military in 1916.

History cannot be re-written, Archbishop Martin stated on Thursday evening in Dublin, and he added that all written history is interpretation and it is important that history always be written without prejudice.

“One-sided history is prejudice. Truth must be based on the inevitable subtleties of history and must try to understand the varied dimensions of any event.”

“It is easy, as some do today, to say that the 1916 Proclamation was an affirmation of unrealisable and misguided idealism.”

“But there is also the idealism of a dream and it would be equally unhistorical not to recognise the idealism of the 1916 Proclamation to attain a Republic which would be a very different kind both to the harsh realities of Dublin in 1916 and sadly to many aspects of the Republic that emerged in the subsequent years and the realities of today,” the Archbishop commented.

“History must be sensitive to the frustrations which led to violence, and the hopes of a different future, without idealising violence or denying the honesty of the hopes.”

The Archbishop paid tribute to the Irish Catholic book for giving “a unique human insight into the minds and hearts of all those who found themselves in that enclosed world of the final days in Kilmainham and Arbour Hill”.

He said the stories of the priests of 1916 as we find them recorded in the archival material of this Church and of the Pro-Cathedral and James Street and of Aughrim Street are “stories of the extraordinary courage and impartiality of ordinary priests”.

“Their activities were not politically inspired. They were humanitarian of the best kind and pastoral care which never sought any personal recognition,” he said.

The book’s editor Greg Daly said it was aimed at providing a more balanced understanding of the role of faith in the Rising.

In his address at the launch, Greg Daly explained that in a discussion about a year ago, with the editor of the Irish Catholic, Michael Kelly, they were discussing how in all the talk about the Rising, the religious faith of the Rising’s leaders seemed to be getting sidelined.

“Sure, we realised that it was something that was talked of incessantly – even excessively – decades ago, but the silence around the issue now just felt deeply peculiar to us.”

“On top of this, with old-fashioned, simplistic and hagiographical narratives about the Rising long dismantled, it seemed to us that the popular understanding of the Rising had become a kind of blank slate, allowing people to claim it for all manner of purposes.”

“More broadly, we felt very few people seemed to know anything about the role of the Church in the Rising.”

He said that aside from the thorny question of whether or not the Easter Rising fulfilled the traditional requirements of a so-called ‘just war’, a key question addressed in the book is the question of what sort of state the rebels of 1916 sought to establish, with key Peace Process player Martin Mansergh arguing that the Rising proclaimed, not a secularist republic but a pluralist one in which the Church’s involvement in education would be respected, with religion being recognised as “a vital thing in Irish schools”.