Home > News > New Bishop of Argyll and the Isles ordained

New Bishop of Argyll and the Isles ordained 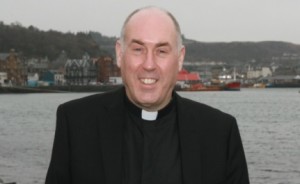 Parallels were drawn between Scotland’s new Bishop of Argyll and the Isles, Bishop Brian McGee, and St Columba by Archbishop Leo Cushley at the episcopal ordination ceremony in the Cathedral in Oban last Thursday.

In his homily, Archbishop Cushley, who presided at the ceremony, spoke of the journey of St Columba to Iona 1,400 years ago, where he and his successors became “the undisputed religious and moral leaders of the people”.

He described the monks of Iona as “respected throughout Europe for centuries”.

Bishop McGee is the son of Irish emigrants originally from Donegal and Belfast who settled in Scotland.

He fills a position which has been vacant since April 2014 when Bishop Joseph Toal became the Bishop of Motherwell.

He acted as vicar general of the Diocese of Paisley and parish priest of Holy Family parish, a disadvantaged area in Port Glasgow, before Pope Francis chose him for this episcopal role.

In his homily, Archbishop Leo Cushley of St Andrews and Edinburgh said Argyll and the Isles are among the earliest places to have heard the Word of God in Scotland.

Referring to its “very distinguished Christian history” he said it is a place steeped in the Celtic monastic tradition, where St Columba and his successors, although not bishops, were the undisputed religious and moral leaders of the people.

“And we should not forget that Scotland itself owes Columba a deep debt of gratitude for the faith’s benign and gentle influence upon our society, something whose positive impact can be felt to this day,” the Archbishop added.

Addressing Bishop McGee he commented, “In a small way, you even imitate St Columba himself. Your mother and sister Brona are here, and I’m sure your dad James, gone to God a number of years ago, would have been very proud of you. Your mum and many of your own people are from the north of Ireland, just like St Columba and, although you come here via Paisley, in a way you are following the trajectory of Columba and many other Scoti of Dalriada from the times when the people on both sides of the water here were essentially the same folk, with the same language, customs, kings and faith.”

“Providence or coincidence, you are where the Lord wishes you to be, and you should never forget that you are in the place where he chooses to send you and to commission to you bear fruit, fruit that will last.”

He recalled that Adomnàn described Columba as a spiritual man and an “island soldier”, devoted to prayer, fasts and vigils.

He says that he was “an angel in demeanour, blameless in what he said, godly in what he did, brilliant in intellect and great in counsel”.

A soldier dedicates himself fully and risks his life for what he loves and believes in; an island soldier, imitating Columba, will add to that a love of prayer and personal discipline, the Archbishop suggested.

But Adomnàn also tells us that Columba was “loving to all people, and his face showed a holy gladness because his heart was full of the joy of the Holy Spirit”, he said and added, “I would wish all of Columba’s virtues for you, Brian. But perhaps this last virtue, of being loving to all people, would be the best gift of all that we could beg for you.”

May the “island soldier” always accompany you with his strong yet loving spirit, as you add your own steps to the long and distinguished history of the Church of Christ in Argyll and the Isles, he concluded.