New bishop of Argyll & the Isles has Irish roots 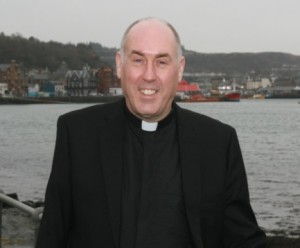 The new bishop chosen by Pope Francis to head up the Scottish diocese of Argyll and the Isles is the son of Irish emigrants who settled in Scotland.

Mgr Brian McGee fills a position which has been vacant since April 2014 when Bishop Joseph Toal became the Bishop of Motherwell.

Mgr McGee is currently Vicar General of the Diocese of Paisley and parish priest of Holy Family parish, a disadvantaged area in Port Glasgow.

Born in Greenock in 1965 and educated at St Joseph’s Primary School and Holy Cross Primary School, Greenock, St Vincent’s College, Langbank, St Mary’s College, Blairs, he studied for the priesthood at St Patrick’s College in Thurles, Co Tipperary. He was ordained a priest for the Diocese of Paisley in 1989.

His parents are originally from Donegal and Belfast.

Responding to the news of his appointment, Bishop-Elect McGee said he was “excited” about his move to the diocese of Argyll and the Isles.

“It has an ancient and proud heritage whose roots stretch back almost one and a half thousand years preceding even its spiritual father, St Columba.”

In a statement he added, “Since then, the consistent witness to Christ and the contribution to the National and Universal Church have been immense and I pray that it will continue to be so.”

The new bishop said he was also mindful of the diocese’s “rich Gaelic character” and although “not yet a Gaelic speaker” he said he would endeavour to promote its rightful use in the worship of God.

“We have entered into the Year of Mercy. I am inspired by this Jubilee’s ethos and I hope to be a bishop that has an unshakable trust in God’s mercy, unafraid to acknowledge my own need of God’s mercy and one who shows mercy to all, especially those who are most in need.”

Pope Francis wrote of our faith communities being oases of mercy. Please God, as individuals, as parishes and the diocese as a body will be a constant oasis of mercy to all.”

He admitted it was “a wrench” for him to leave the Diocese of Paisley. “This was where I wanted to minister from my youth and I have always been very happy there.”