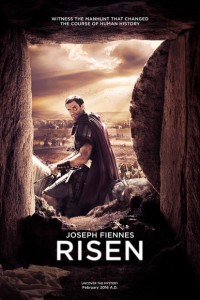 British actor Joseph Fiennes, who plays Clavius in the new film ‘Risen’, has said the film offers a unique perspective to the crucifixion and resurrection of Jesus.

Risen is the epic story of the Resurrection.

The film has been described by some in the industry as a biblical CSI as it turns the resurrection into an investigation.

The story is told through the eyes of an unbelieving Roman solider, Calvius.

Cliff Curtis who plays Jesus, has said it’s a role he had always wanted to play and playing ti was one of the most beautiful experiences of his career.

Clavius (Joseph Fiennes), a powerful Roman military tribune, and his aide Lucius (Tom Felton), are given the task of solving the mystery of what happened to Jesus in the weeks following the crucifixion, in order to disprove the rumours of a risen Messiah and prevent an uprising in Jerusalem.

“I loved the story of Clavius in terms of the notion of delivering a story that we all know so well – Christian and non-Christian but through the eyes of a non-believer,” Fiennes said.

“I thought that the particular lens through the eyes of a Roman tribune who is there to… bring order along with Pontius Pilate to Judea and out of that he falls into the greatest murder mystery of all time,” he continued.

“And then it really challenges his conditioning and in the end we see him in a place where he can never go back to Rome,” Fiennes explained.

He told Fox News, “We strived very hard in getting the balance between cinema and Scripture. Working with the church communities in the process of making the film has allowed us to stay as true as possible to Scripture.”

“It’s a film and we want people to have a great cinematic experience,” Fiennes added.

Rich Peluso of Sony’s faith-based Affirm films is one of the project’s producers. He hopes ‘Risen’ continues the box office success of faith-based films.

“This is a real valid storytelling perspective and I think with research it shows 127 million Americans go to a Christian church every week – that shows that faith-based storytelling is not a niche – it is mainstream,” he told CBN News.

Peluso has said he wants believers to walk out of the film “energised and excited and just blown away from the other side of the story and really refreshed going back to the scripture,” he told CBN News.

“For non-believers, I want them to really wonder, maybe Christ really rose…and start to think about and dig into the evidence that they have right in front of them,” he said.

Writer/director Kevin Reynolds, whose past films include ‘Robin Hood: Prince of Thieves’, ‘’Waterworld’ and ‘The Count of Monte Cristo.’

At the beginning of February Joseph Fiennes, who has previously starred in ‘Shakespeare in Love’ and as Martin Luther in a 2003 biopic, met Pope Francis in Vatican City.

Fiennes was in the city with actress Mario Botto and the producers of Sony Pictures for a showing of the film at the Vatican.

Fiennes was accompanied by his wife Maria Dolores Dieguez, and their two daughters at the general audience in St Peter’s Square, where Pope Francis greeted them all.

He told the Guardian: “I tried to maintain a face that was calm and cool but I blubbered like a baby. I don’t know what it is – he’s authentic.”

The actor added: “I like what he represents. I feel it’s something tangible to me in the modern age. He’s a man who carries his own suitcase. He’s a man that doesn’t want the pomp and the ceremony. He’s stripping it down.”

“I like that he’s challenging, especially in today’s world. I think it’s wonderful that he represents an authenticity that speaks to the people. So he’s an important man, he’s deeply connected in a spiritual way.”

Fiennes and his wife married in a Catholic ceremony in 2009.