A new Irish seminary for missionaries, Redemptoris Mater in Dundalk, Co Louth, was officially opened and blessed this week by Archbishop Eamon Martin of Armagh.

The seminary was founded in 2012 by Archbishop Martin’s predecessor, Cardinal Seán Brady, to form diocesan priests who will be missionaries for the New Evangelisation.

At present there are 16 seminarians at Redemptoris Mater, with the young men coming from Croatia, England, Ireland, Italy, Poland, Scotland, Spain and the USA. 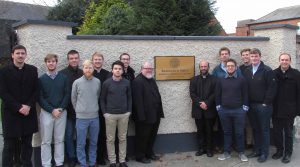 Some of the men of Redemtoris Mater Dundalk

One thing that the seminarians all have in common is that their vocations came via the Neocatechumenal Way, a charism that provides post-baptismal formation to adults, typically in small parish-based communities.

Founded in Madrid in 1964, ‘The Way’ has been active in Ireland for more than 30 years and present in the Armagh diocese for a decade now. Worldwide, there are tens of thousands of parish-based communities belonging to The Way and more than 100 Redemptoris Mater seminaries.

That said, the institution in Dundalk is not a Neocatechumenal seminary; it is very much an Armagh diocesan seminary. Priests from this college will be incardinated* into the Armagh diocese and serve in Armagh’s parishes and in the institutions of that diocese. After some time of priestly ministry in their diocese, according to the discernment of their bishop, the priests will be available to be sent on a mission.

The seminarians receive their formation in Dundalk and travel to Maynooth for their philosophical and theological studies.

At the blessing of the seminary on Wednesday, Archbishop Martin said: “I am convinced that the Lord is with this, because already we can see it bearing fruit and I hope and pray that it will continue and that we will all be faithful to what the Lord wants of us.”

The archbishop continued: “As we mark the feast day of Saint Columbanus, let us reflect on this saint who was a great Irish missionary, and who was one of a whole body of Irish men and women who left this country and went out into Europe and brought the Gospel at a time when it was difficult and dark and alien to the faith but, with the help of God, these pioneering faith-filled missionaries succeeded and began a new chapter in the life of the Christian faith in Europe.

One of those present on Wednesday was Fr Maciej Zacharek, from Poland, the first seminarian from Redemptoris Mater Dundalk to be ordained. He is currrently serving in Our Lady of Lourdes parish, Drogheda.

Redemptoris Mater is funded largely by voluntary donations. To learn more about the seminary and to make your own donation to this cause see www.redmatarmagh.org.

*Incardination describes the placing of a member of clergy under the jurisdiction of a particular bishop or superior.