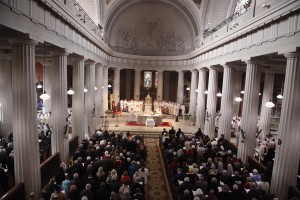 A new suite of music commemorating the centenary of the 1916 Rising by one of the country’s most distinguished traditional musicians, Dr Charlie Lennon, will premiere at a Dublin church this week.

The composition, Áille na hÁille – a Terrible Beauty, will have its first Dublin performance on Thursday 12 May in the city’s historic Pro-Cathedral on Marlborough Street.

May 12 is the date of the last executions of the rebel leaders, James Connolly and Séan Mac Diarmada, in Kilmainham Jail.

The evening’s unique commemoration will also involve the reading of first-hand accounts from the Dublin priests who ministered in hospitals, on the streets and in jail to the injured, dying and bereaved – often at enormous personal risk – during Easter Week 1916.

In his memoir he recalled, “In giving a description of James Connolly’s execution Fr McCarthy told me that the prisoner, who was in a bad condition, elected to stand like the rest but failed. He was then tied to a chair but slumped so much that he overbalanced. Finally, he was strapped to a stretcher and placed in a reclining position against the wall. The sight left an indelible impression on Fr McCarthy.”

Charlie Lennon will take part in this historic performance of his suite, playing fiddle and piano.

He will be accompanied by a wealth of renowned traditional musicians, including Éilís Lennon on fiddle, Michael O’Brien on uileann pipes, Jim Higgins on percussion, Ruth McGinley on piano, Elizabeth Cooney on violin as well as singers Patricia Bourke D’Souza & Albert Llussa Torra.

Recalling the accounts of those priests who ministered on the streets of the burning city will be Dublin Diocesan Archivists, Noelle Dowling and Darren Maher.

Twenty priests, including a curate who would go on to become Archbishop of Dublin, were involved in ministering to those caught up in the events on both sides of the divide one hundred years ago.

Among the historic 1916 documents in the Diocesan Archives is an account of how over 40 people sought refuge in the Pro-Cathedral when fighting broke out in the city centre.

All around the Cathedral buildings were ablaze – the group were forced to stay inside the “Pro” for three days.

Meanwhile, the priests of the Cathedral continued to come and go from the building to be with the wounded and dying.

One Cathedral curate ran from the Pro to Wynne’s Hotel through streets raked with gunfire from all sides to attend to a wounded man who was badly injured.

Jervis Street Hospital quickly filled with the wounded and it was the busiest hospital in the city centre during the week of the Rising.

A priest was in attendance at all times to cater for the many religious needs of the wounded and dying.

The Very Rev Richard Bowden, Administrator of the Pro Cathedral, ensured that clergy were always available.

He stayed there constantly through Monday, Tuesday and left on Wednesday morning when curates, Fr Edward Byrne (who would later become Archbishop of Dublin) and Fr Joseph Mc Ardle took over.

Áille na hÁille begins at 7.30pm in St Mary’s Pro-Cathedral on Thursday 12 May.  No tickets are required for this event. Voluntary donations towards the cost of the performance will be taken up on the evening.