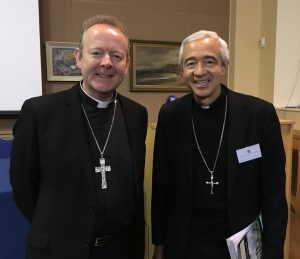 In his address to an international symposium ‘Models of Priestly Formation: Assessing the Past, Reflecting on the Present and Imagining the Future’ in Maynooth last weekend, the Archbishop of Armagh said delegates were “being invited to step out of our comfort zones in order to re-imagine past and existing models of formation in light of the new Ratio.

He expressed the hope that one of the fruits of the symposium would be to inform the preparation of a new Ratio Nationalis for Ireland.

Episcopal Conferences are currently tasked with redesigning and updating their programmes of priestly formation.

This means not only implementing the new Ratio in a way that takes account of local traditions, customs and needs, but it also means courageously moving the whole formation experience beyond past and present methods so that priests will be suitably prepared to engage with, and evangelise, the secularised contemporary culture.

In the past, Archbishop Martin said the seminary structure and programme was inclined to emphasise order, structure and discipline.

“Equipped with this ‘training’ we emerged after Ordination into a very complex and conflicted world, where we found an increasing disconnect between what our Church stood for, and the prevailing culture around us.”

“Who knows what challenges lie ahead for today’s seminarians? How might we best prepare them for the changes that will transform the world in twenty or thirty years’ time but which cannot even be dreamt of today? To put it in business terms: how can we ‘future-proof’ formation?”

He said the new Ratio could help in this regard. “It emphasises a model of priesthood as continuing discipleship, meaning that, even after ordination, formation cannot be ‘interrupted.’ The priest not only ‘learns to know Christ’ but, under the action of the Holy Spirit, he finds himself within a process of gradual and continuous configuration to Christ, in his being and his acting, which constantly challenges him to inner growth (Ratio 80).”

In this sense, the priest can never consider himself to be definitively formed.

“A priest is certainly not the man who arrives into a parish, perfectly packaged, with all the answers. There will often be people who are more qualified than he in facing particular problems, and the new challenges that emerge may well be beyond his seminary formation. This is why his relationship with Christ is paramount.”

He added, “It has to be fundamental then, to every model of seminary, that we are all – seminarians, rectors and formators, theologians – on the life-long journey of discipleship, called to follow Jesus Christ.”

Both Archbishop Martin and Archbishop Jorge Carlos Patrón Wong, Secretary for Seminaries at the Congregation for Clergy, stressed the importance of a quality propaedeutic experience, rooted in the cultural, ecclesial and social reality of Ireland, preceded by a period of accompaniment and discernment with an experienced priest who would be a mentor and spiritual director.

Archbishop Martin said it was important that the seminary formation team not only accompanied seminarians, but was itself open to being formed in the process.

Speaking to CatholicIreland.net about the propaedeutic year and the Irish context, Archbishop Wong said each conference of bishops would adapt this proposal to their own country according to the ratio nationalis.

“Evidently we are very happy that all the steps that seminary of Ireland are taking totally in communion with the universal church.”

“We’re very happy that the bishops of Ireland have a tremendous relationship of communion among them and with the Holy See. That gives certainty to formators, seminarians, priests and the people of God.”

Professor Hans Zollner, a member of the Vatican’s Commission for the Protection of Minors, warned that from his travels around the world “in many parts of the world you don’t have a really developed concept of ongoing formation for priests”.

He also highlighted that there were often practical difficulties.

“How would ongoing formation work, for example, in the bishops’ conference of the Pacific, where from one island to another, the boat journey can take many hours. Or in those African countries with huge dioceses. There is no comparison between a diocese in the centre of Ireland and a diocese in the centre of Kenya or Angola where you have hundreds of kilometres within one diocese to cover so that you can get to a formation meeting..”

Speaking about the Irish Church in the wake of the abuse scandals, Professor Zollner said, “I think, all in all, the Irish Catholic Church has come a long way.”

He paid tribute to the bishops and the religious congregations and orders and the missionary societies for the National Board and its supervision and auditing of dioceses and congregations continuously.

Of those undergoing formation for the priesthood who may be victims of sexual abuse, he told CatholicIreland.net, “From all I know in Maynooth and the Irish College in Rome, they certainly provide a high standard of accompaniment for seminarians who need to deal with issues from their past including possibly having been abused themselves.”

He added, “The seminary has to provide, from the beginning from the screening process from the admission to the seminary throughout all the formation years to the screening for the admission to Holy Orders, specific appropriate accompaniment – this has been called for by the Congregation for Clergy in the recent document on seminary formation and ongoing formation. I believe that the Irish Catholic church provides much of what is asked for and that people who are in the seminary will receive the help they need.”