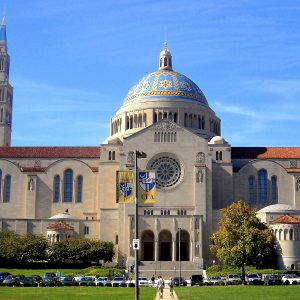 The largest Catholic Church in North America, the Basilica of the National Shrine of the Immaculate Conception, in Washington DC, is finally complete after nearly a century of construction work and interior and exterior decoration.

The final element of the basilica, a mosaic containing 14 million pieces of glass, was blessed on Friday, the Feast of the Immaculate Conception, at a Mass that was celebrated by 90 cardinals, bishops and priests and attended by more than 4,000 people.

The mosaic is contained within the ‘Trinity Dome’. It depicts the Holy Trinity, the Virgin Mary, a procession of saints and angels, the four evangelists and the Nicene Creed.

For many years, while the mosaic was being installed, the centre of the basilica was occupied by scaffolding. It has been a long journey, but the completion of the building comes just in time to celebrate the 100th anniversary of the laying of its foundation stone in 1820!

One of the 10 largest churches in the world, the basilica is 142m in length by 73m in width, and is 72m tall from the ground to the top of the cross situated above the Trinity Dome, which has a 27m diameter, only 2m smaller than the dome of the United States Capitol Building. Inside, there are 70 chapels, and the building is designed to hold 10,000 worshippers.

If you think the 97-year gestation period from the laying of the foundation stone to the building’s completion is medieval, then you won’t be surprised to learn that the building uses traditional construction methods that rely on masonry walls, stone columns and numerous domes – there is no structural steel or reinforced concrete used here.

Nevertheless, the chief celebrant on Friday, Cardinal Donald Wuerl, Archbishop of Washington, described it as a ‘modern day masterpiece’. In his homily he recalled how, as a seminarian, he came to visit the basilica in the 1960s, when all the walls except one were of exposed brick.

In 1913 Bishop Thomas Joseph Shanahan, the fourth rector of the Catholic University of America, based in Washington, proposed to Pope Pius X in 1913 that a national shrine to the Immaculate Conception be built in the capital of the USA. Not only did the Pope give the proposal his blessing, but he gave Bishop Shanahan US$400 (the equivalent of just under $10,000 in today’s money) to help get the project under way.

By 1919, Bishop Shanahan was able to approve a Byzantine-Romanesque Revival architectural design, and construction work began the following year. More than 10,000 were present when Cardinal James Gibbons, Archbishop of Baltimore, blessed the foundation stone.

Work on the building stopped when America was hit by the Great Depression in 1929, at which time only the crypt had been completed. Work was slowed down again when America entered the Second World War in 1941. 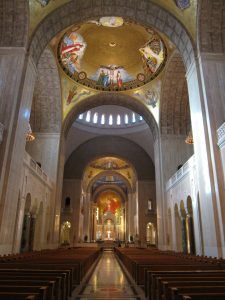 However, in 1953 the US bishops pledged to raise the funds necessary to complete the upper church, which was dedicated as a place of worship in 1959.

The crypt contains many treasures, including the Papal Tiara of Pope Paul VI, which it has held since 1968, and a golden rose presented by Pope Benedict XVI in 2008. Pope Francis celebrated the canonisation of Junipero Serra OFM here in September 2015.

In his homily on Friday the Cardinal said: “This magnificent tribute in stone, glass, marble mosaic to Mary, Mother of Jesus, Mother of God and our Mother, invites all of us to recognise not only the special role of Mary in our life but the unique glory that is hers in her Immaculate Conception.”