Nearly 100 community projects in Galway City and county have benefited from the proceeds of an unexpected  €7.73 million bequest to the Society of St Vincent de Paul.

The money was left to the society by Maureen O’Connell, the late owner of O’Connell’s Bar on Eyre Square in Galway city centre, who died in 1998. Ms O’Connell was unmarried and had no children. Her will left her estate to the poor of Galway.

The will was contested by relatives and it was not until 2003 that funds could start to be dispersed. O’Connell’s bar was eventually sold in November 2006 and, at the height of the property boom, fetched €14 million. After legal fees were paid and settlements accounted for, there was €10.5 million available to go to charity. At the time, it was the largest charitable bequest in the history of the state.

The money has primarily been used by the Society of St Vincent de Paul to help fund new and existing projects and developments in the City of the Tribes and the surrounding county. Additionally, some of the fund have been used to help families and individuals whose personal situations and difficulties fall outside the normal remit of local SVP conferences. 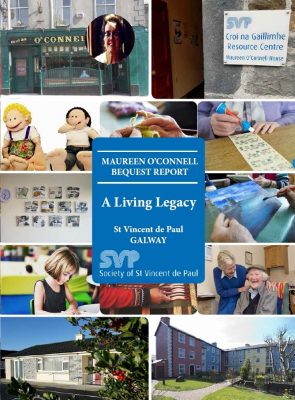 The Maureen O’Connell Bequest Report – A Living Legacy to those helped by the SVP in Galway.

This week the West Region Council of the SVP published a report detailing how monies were spent by the special committee established to handle dispersal of the funds. Projects supported include:

SVP West Region president Michael McCann said the unexpected blessing of the bequest came with huge responsibilities for the society’s team of volunteers. He said: “How could we use this fund to honour Miss O’Connell’s wishes, while also tackling the root causes of poverty and social exclusion in Galway city and county? This was the question that the members of the society had to grapple with.”

Given the scale of the legacy, Mr McCann said the SVP in Galway saw it as “an opportunity to invest in lasting changes for families and communities to break the cycle of poverty”. Indeed, such is the impact of the bequest, that the SVP describe it as a “Living Legacy” and have used that phrase as the title for the report on how the bequest was spent.

So far 95 projects in total have received funding from the bequest – 61% of these received capital funding and funding for new equipment, 19% received help with their operational costs and 10% was used to help households with direct assistance/support.