Home > News > The key to child protection is education: expert

The key to child protection is education: expert 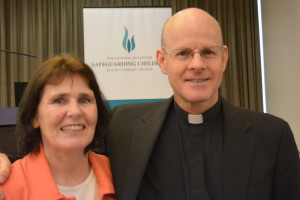 Teresa Devlin, CEO of the National Board for Safeguarding (NBSCCCI) and Mgr Steve Rossetti, expert adviser to the US bishops on child sexual abuse.

The key to child protection is education a psychologist who advises the US bishops in this area told a conference on safeguarding in Athlone at the weekend.

In his address to the first national conference on safeguarding in Ireland organised by the National Board (NBSCCCI), Mgr Steve Rossetti said that while good response policies are important, “the heart of the matter is education — stopping abuse before it occurs”.

Last year, the Catholic Church in the US spent $43 million on child abuse prevention and education, he related and underlined that this figure does not include legal fees and settlements.

“I can say without qualification that the Catholic Church in the United States has the most effective, extensive, and expensive child protection programme of any organisation in that country,” he said.

To date, over 5.2 million adults and children have gone through the safe environment programme in the US.

Every adult, priest, lay employee or volunteer, who has contact with children, must go through the training. Criminal background checks are also used before individuals are hired and over 3 million of these have been done by the Church in the US.

The author of numerous books on abuse and the spiritual health of priests, Mgr Rossetti said that while it is difficult to see directly the fruits of education programmes, nevertheless if the goal is to protect children, then education ought to be the centrepiece of the Church’s strategy.

“As we are starting to educate millions of Catholics around the world, the Church is no longer a safe-haven for abusers,” he told hundreds of safeguarding delegates representing Irish dioceses, religious orders and members of the hierarchy.

He explained that children are more alert to dangers. Parents more adequately supervise their children. Church organisations implement better boundaries for its minors.

“Potential abusers are put on notice – they now know they will suffer the full penalty of the law and they will be ejected from ministry. And sadly, if abuse does occur, our institutional response will be swifter and more effective,” the priest from the diocese of Syracuse said.

Referring to Archbishop Eamon Martin of Armagh’s keynote address which opened the conference in Athlone, Mgr Rossetti said these efforts were all aimed at creating a “culture of safeguarding.”

He also reported important progress in the US where child abuse rates are dropping throughout the society and the rates in the Church “are plummeting even faster”.

“At the recorded height, the John Jay Study said 4 percent of clergy were involved as perpetrators. Now, that number has fallen to less than 1 percent. We have turned the corner, but we shall not rest until the number of abused children is zero.”

Mgr Rossetti, who has been involved in the treatment of clerical sexual offenders, praised the Gregorian University’s Centre for Child Protection’s new e-learning programme as an example of what needs to be done.

Praising the Irish Church’s ‘One Church’ safeguarding policy he said after thirty years of dealing publicly with this issue, a template on how to put children first, on what makes an effective child protection plan, is emerging.

“If you look at the child protection policies and programmes in the countries around the globe that have dealt with this issue, an increasingly clear outline is emerging. It includes such basics as:

But he underlined that it is also becoming increasingly unconscionable that this template is not being firmly applied in countries that have not yet gone through a public media lashing on this issue, those countries who have not yet been forced to deal with the sexual abuse of minors.

“Why wait? Let us be prophetic, and not simply reactive,” he urged.

The Vatican’s Congregation for the Doctrine of the Faith has begun this process he suggested by asking every country around the world, all 112 bishops’ conferences, to submit its guidelines for protecting children, helping victims, training priests, collaborating with civil authorities and dealing with alleged perpetrators.

Over 90 percent of countries have already complied. 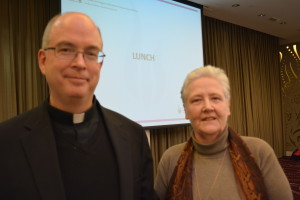 Marie Collins and Mgr Bob Oliver of the Vatican’s Pontifical Commission for the Protection of Minors.

“This is a good start, but only a start. I would like to suggest that we need an international policy that is mandatory.”

He regretted that victims of clerical abuse were relegated to second place. He recalled one American bishop who said, “We forgot that victims are part of our flock too.”

“What has begun to change this is one very simple practice: bishops have started to listen directly to victims.”

He thanked Marie Collins and all those like her who have stood up and told their story. “More than anything, this is what is turning the tide,” he said.

Referring to Pope Francis’ words, “There is no place in the Church’s ministry for those who commit these abuses”, Mgr Rossetti said this sounded like zero tolerance to him.

“The question of accountability for those in leadership is now on the front burner. In putting together our template for the future, this is the next, and perhaps one of the last, aspects to be clarified.”

People want Church leaders who have caused much scandal in their handling of cases to be reprimanded or removed, he said and he added that Cardinal O’Malley has indicated his support and the Papal Commission has recently put forward some proposed guidelines to the Pope on this.

He also highlighted that ministry, as canon law understands it, is a privilege, not a right. “We forgive. God forgives. But that does not mean one has the right to ministry”.

The priest, who has been an expert adviser to the US bishops added that if there is any behaviour that warrants losing the ministerial privilege it is the sexual molestation of a minor which Pope Benedict described as “filth.”

Cardinal Sean O’Malley, who heads up the Pontifical Commission on the Protection of Minors said on 16 February in Rome that he strongly supports ‘Zero tolerance’- no offender can ever be returned to ministry.

At the same conference, Irish clerical abuse survivor, Marie Collins who is a member of the Pontifical Commission for the Protection of Minors outlined the progress the various working groups are making.

Speaking to CatholicIreland.net, Mrs Collins said that she is involved in more than one working group, with her interests and skills focused on education and working with survivors.

“The impression out there is that we sort of haven’t done anything – but really we have. The working groups are now set up, have started work – they are at different stages but each group is focused on the work it has to do – each group knows exactly what they want to achieve – and will have their priorities.”

Mgr Bob Oliver, who is secretary of the Pontifical Commission for the Protection of Minors said the working groups are determining what the priorities are so what they will have specific projects and policies to the Pope at the next plenary meeting in October.